Floyd Mayweather has beaten Conor McGregor in Las Vegas, claiming his 50th victory and cementing his legacy as one of boxing’s all time greats.

UFC champion, McGregor had been written off before the fight, but the Irishman surprised many of his critics, taking the bout to 10 rounds.

He got off to a flying start, throwing a series of punches at the 40-year-old and scoring a few early points.

As the first round wore on, Mayweather went on the offensive but failed to connect and it was the Irishman who was ahead as the bell rung.

“No one’s taking these types of risks. I’ll take it on the chin.” #ConorMcGregor

In the second round, McGregor continued the assault and easily held his own against the undefeated Mayweather.

For the first few rounds, Mayweather struggled to stamp his authority on the contest, receiving blows to the head and failing to make an impact on the 29-year-old opponent.

But Mayweather is known to be patient and began to find his rhythm in the fifth round. 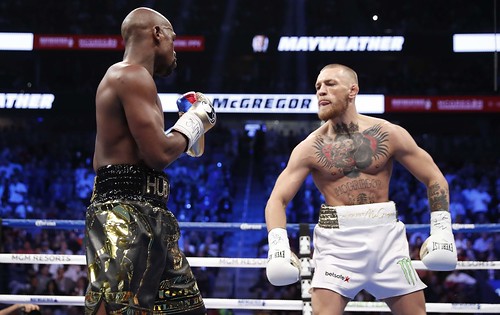 After a failed attempt at a comeback in the 9th round by the Irishman, his legs clearly wobbling by then, Mayweather finished him off in the 10th with the referee stopping the fight.

“I really enjoyed this experience, McGregor told a press conference after. “It was a great fight, I learned a lot, I don’t know yet what the future holds for me, in UFC.”

The Irishman wasn’t excluding a career in boxing.

However, Dana White, UFC chief said he hoped that his star would now concentrate on the mixed martial arts fights.

Mayweather, who has signed his 50th victory in as many fights confirmed his retirement and said he’s not sure he see’s McGregor returning to the boxing ring anytime soon.