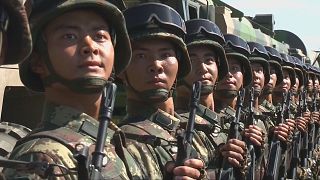 Chinese President Xi Jinping was the guest of honour at a mass rally of troops on Sunday, marking 90 years since the founding of the People’s Liberation Army.

He inspected soldiers from the back of a jeep at the remote Zhurihe training base in China’s northern Inner Mongolia region, in an event carried live on state television.

China’s armed forces, the largest in the world, are in the midst of an ambitious modernisation programme.

Xi told the military to transform itself into an elite force and said it must ‘unswervingly’ back the ruling Communist Party.