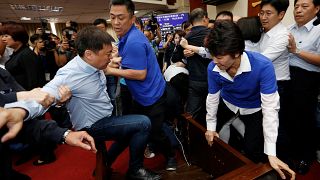 A disagreement over funding for a new infrastructure project sparked a fracas between politicians in Taiwan.

Members of the ruling Democratic Progressive Party (DPP) and opposition Nationalist party pushed each other to the floor during the debate in parliament.

Others throw water and lift chairs, while one man is thrown in to a camera.

Taiwan’s legislators are known for their brawls, which are seen as a way for parties to show strength.