“My house is here, in Nicosia, but my home is in Morphou”

Ourania Peletie, a Greek-Cypriot, will never forget the day she had to flee from the Turkish army. Since then, her house has become home to the Turkish-Cypriot Gakartas family. It’s a reminder of the never-healing wounds that afflict the island of Cyprus where there are still thousands of internally-displaced people, hundreds of missing and a border, the so-called Green Line, which splits the island in two. 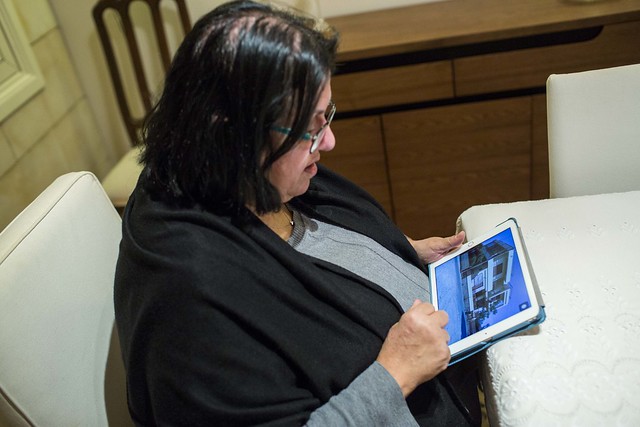 In the south lies the Republic of Cyprus, part of the European Union and in the north, the self-declared Turkish Republic of Northern Cyprus, an isolated state which is only recognised by Turkey.

For two years, leaders of the two communities seemed to agree on at least one thing, that it is time to try to remove the Green Line.

However, negotiations in recent days in Crans-Montana, Switzerland have failed once again, as confirmed by UN Secretary-General Antonio Guterres.

Several points hamper the agreement. The Greek Cypriot side wants Turkey to withdraw the nearly 50,000 troops it maintains on the island, which the Turkish Cypriot side opposes. And there is also controversy over who will control key places such as Famagusta.

Hope remains, but so does bitterness, resentment and loss. 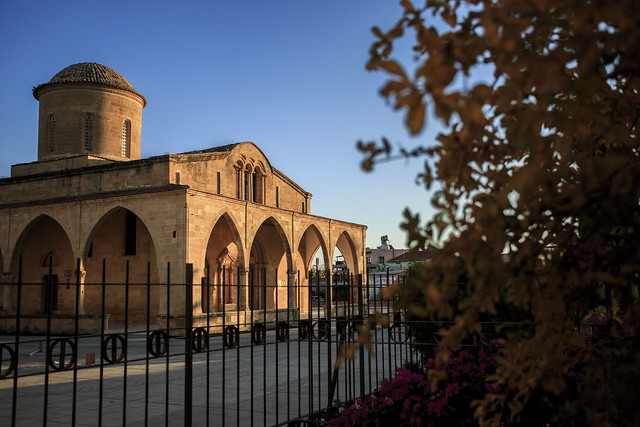 The last aircraft to land in Nicosia

Nicosia’s decaying airport has been closed for forty years and its windows in the rusted up terminal building have long been broken. Nearby, a Trident 1E aircraft is slowly rotting away. Major Szakszon from the UN mission based in Cyprus, tells the story of Adamos Marneros, the last pilot to land at the airport in 1974.

Captain Marneros is ready to fly the CY317 flight from London to Nicosia. But news of political unrest breaks: Greek Cypriots troops have launched a coup with the aim of unifying the north with Greece, and Turkey is threatening to invade. Given the danger, Marneros requests to cancel the flight. There are only six passengers, after all, but the request is denied.

So he takes off and whilst approaching the island, Marneros flies over a Turkish navy flotilla heading to the port of Kyrenia. It is 3 am, June 24th and the invasion is about to begin. The pilot reports to Nicosia air control.

“Thanks to his warning, the Greek Cypriot leadership was able to react promptly,” Major Szakszon said. The plane lands and the passengers disembark just before the beginning of the bombing, which destroys both the runway and the aircraft.

Today, inside the terminal building, an old sign forbids tipping porters. Pigeons fly idly among barbed wire. A billboard invites passers-by to visit the holiday city of Varosha, currently as walled and deserted as the airport itself.

Famagusta and its ghost city

In the seventies, Varosha neighbourhood in the city Famagusta, was a dream holiday spot and the most prized piece of real estate on the island. Even today, locals like to boast about the Hollywood stars who used to visit. But its fate lay in its location: the Turkish military unrolled barbed wire right down to the beach, fencing it off from the Green Line, and the once luxurious hotels where stars such as Elizabeth Taylor once stayed are now home to pigeons and rats. 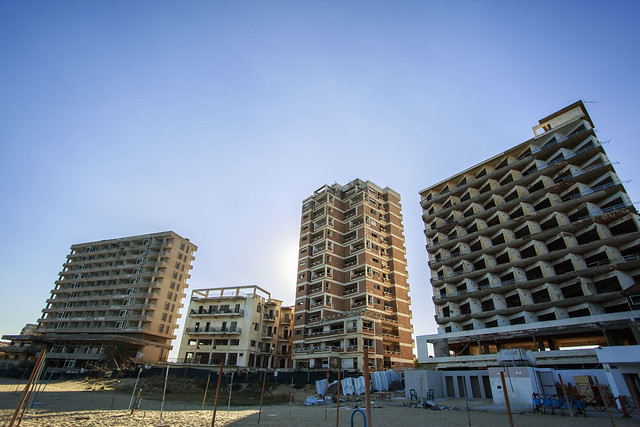 Greek Cypriot Constantis Candounas’ family had a house on the beach, but today it remains in a no-go zone adjacent to the Green Line and neglected since the days of the war.

“After 1974, many people have this feeling as if their lives are incomplete, that something is missing. Many families have been destroyed by the war, in several ways. People think of their missing houses as the last places where they were happy,” says Candounas.

“I lost the best years of my life. First trying to survive and, then looking after my family,” recalls Ourania Peletie.

She remembers the smell of orange trees and the blossom. “My grandfather used to tell us that four generations made a living in Morphou out of these citrus groves,” she said. 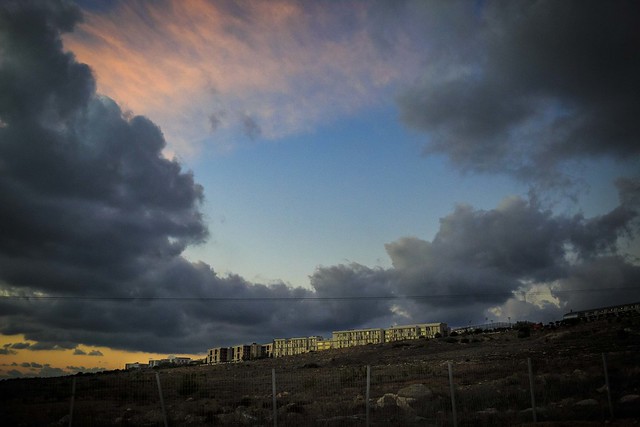 Before the war, Morphou was an important citrus production centre. Now it is another wound that can’t be healed in this frozen conflict.

Solomou street, where she used to live, is called Ataturk street now, although the house looks exactly the same as in her photos. In 1974 the Gakartas family lived in Limassol in southern Cyprus. Munin Gakartas recounts how his parents-in-law were killed in the conflict and that he spent three months in prison. “I have lived the war,” he says dolefully. 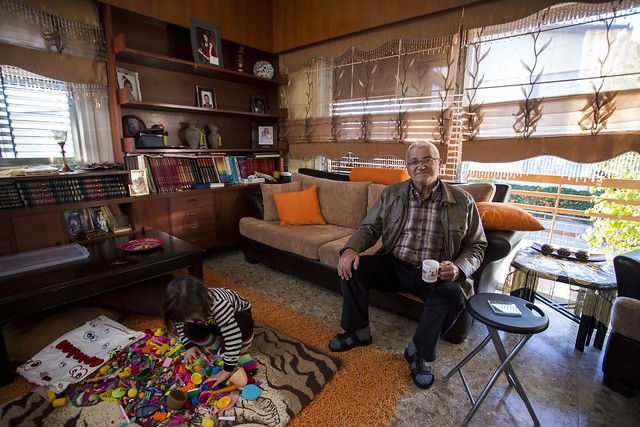 Following an exchange of prisoners, the Turkish Cypriot authorities allocated Ourania Peletie’s house in Morphou to them. As one climbs the stairs of the house, the pictures of four Turkish Cypriot children born there hang from the walls.

If there is a peace agreement in Cyprus international law rules that property seized by an invading army must be returned. In practice this often is overlooked in peace deals, but the long-running involvement of UNFICYP, the United Nations Peacekeeping Force in Cyprus, means that if a peace deal is achieved homes are likely to be returned to their original homes, even after forty years.

But Munin Gakartas doesn’t believe peace will ever happen: “I don’t believe that they will find a solution,” he states.

The conflict left 2001 missing persons: 493 Turkish Cypriots and 1508 Greek Cypriots. By June 2017, it has carried out 1203 exhumations and identified 766 missing people. Without finding the remains of the missing – or any other evidence that they died – their relatives are forever unable to mourn their passing and move on.

Gulseren Baranhan works for the Committee of Missing Persons (CMP), the body assigned the task to recover, identify, and return to their families the remains of those who went missing during the inter-communal fighting of 1963 to 1964 and the war of 1974. “They feel the pain as if it was today,” he says.

The CMP is an intercommunal body supported by the international community and has three members, two appointed respectively by the Greek Cypriot and Turkish Cypriot communities and the third appointed by the United Nations. Its has an annual budget of three million euros, financed by the EU, Cyprus, the US and other donors. But the CMP has no legal mandate because there is no political solution for the conflict yet, and so it can only operate on goodwill.

“War leaves all kinds of wounds in people. One which can not heal is the one happening when a father does not come back by dinner time. It breaks the bonds between communities,” says Paul-Henri Arni, the UN member. 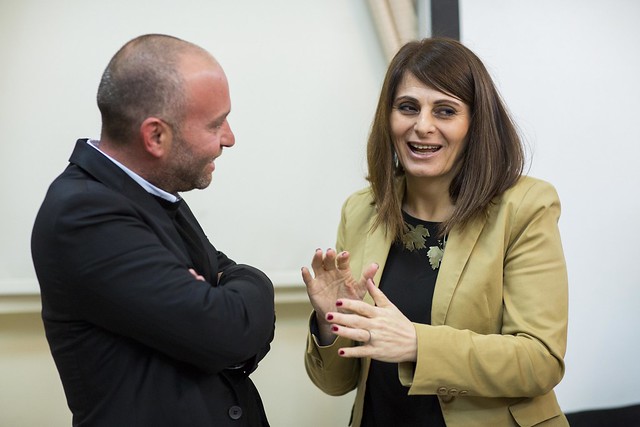 Spyroula David was six years old when her father went missing. Her family waited for a response about his whereabouts for decades. On 31 October 2014, they got a call from the CMP to say that some of her father’s remains had been found.

“I could hold them in the palm of my hand. My father’s life was handed to me in the palms of my hand,” she said sadly. But her family is searching for the rest of his remains so that they can arrange a proper funeral. “We need an ending,” she says.

The CMP’s mandate prevents them from researching the crimes and prosecuting those responsible for them. The reason behind that is to help witnesses come forward with what they know about the missing persons without fear of legal action. At the lab, there are skulls with an entry hole at the nape and an exit hole at the frontal lobe, a clear indication of summary executions.

Greek Cypriot families have received a death certificate which reads “cause of death: unknown” but for David, this is unacceptable, who says: “I know how my father died. My father was killed and thrown away by the Turkish military.”

An open door to hope

Given all the pain and hard feelings, in 2003, when six checkpoints were opened at the border, hawkish politicians from both sides waited for the bloodbath, but what actually happened was that relatives and friends from both sides rushed to meet each other again.

Peletie took her time in going back to Morphou and she wanted to take her children with her to show them the citrus groves. “All this is yours,” she said to them. Her daughter, now studying in the UK, vowed to go back and build her future clinic there.

Gakartas rushed to Limassol looking for a friend, unaware that, at the same time a friend of his was looking for him in Morphou.

When the border opened, Candaunas set up an office in the north offering legal advice for free. During an interview for Turkish Cypriot TV, he said that because he had to flee from Famagusta, he left everything behind and he had not been able to keep a photo of his father. 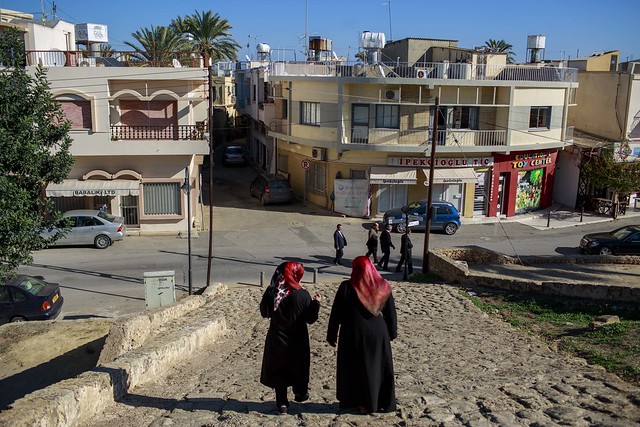 At the same time, one Merhed Kemal was watching the TV with his father in law, Ahmed Tosun. “I know this person’s father,” he yelled out.

So they went to Candaunas’ office. Tosun, without a word, hugged him for a long time. “Your father was a good man,” he said to him. Tosun told Candaunas that they used to work together at the port of Famagusta and that his father once saved his life from the Greek militias who wanted him dead.

And Tosun delivered him a picture of Candaunas’ father.

David went back to meet the family living in her old home. “They were very nice. The son of the family opened my room and he offered me to come in. I thought: How do you dare? This is my room. I could see me there playing with my toys. Then I took a breath of air and thought “OK, whose room is this now? I was six years old back then, now he is twenty years old,” she says.

Her experiences have left room for optimism, even while she realises the pain that has been experienced by both sides cannot be undone: “We should do the best for everybody and to move on. We need to heal our wounds.

Now it is a bleeding wound. Whenever there is a wound, you first stop the bleeding. The wound will be a scar, and the scar will always be there, because we will always know what happened, but it will not be painful”. 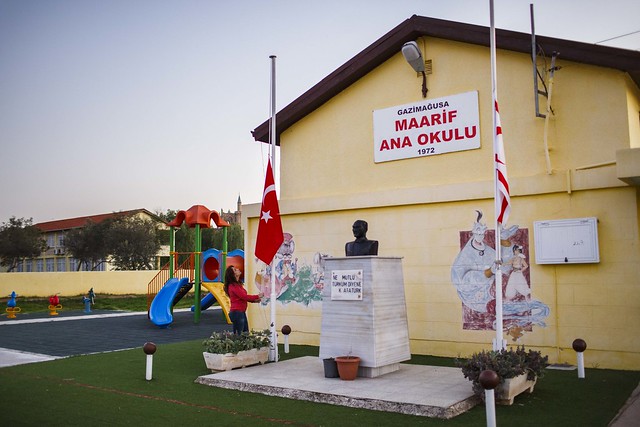