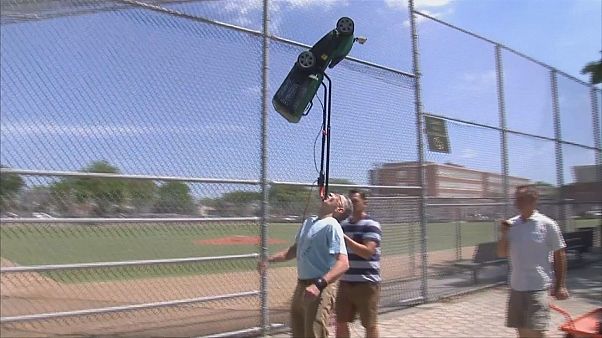 Pushing a running electric lawnmower for 71 meters is not a difficult thing to do, but try doing it with a lawnmower balanced on your chin.

On Thursday (June 22) New Yorker Ashrita Furman broke, by more than 50 meters, his existing Guinness World Record for “The farthest distance walked balancing a powered lawnmower on the chin.”
When he finally lowered the grass-cutter to the pavement, Furman had traveled an impressive 71.53 meters, easily besting his previous and still-existing record of 20 meters.

“I feel great. I feel that I achieved self transcendence. I pushed beyond what I had done before by a lot and I’m very, very happy,” said Furman.
Although he made it look easy, Furman said he was constantly battling the elements.

“It was touch and go there. Wind is really your enemy in this kind of balancing, and I had a couple of gusts of wind where the lawnmower felt is was going to spin off, said Furman.

Furman also said the “ the centrifugal force of the whirling blades makes it feel like the lawnmower is constantly “trying to spin off your chin.”
Although Furman will add another Guinness Record to his growing list, he said he cannot take credit for inventing this lawnmower walk.

“Guinness invented this. I don’t think I would have thought of this crazy idea but I’m glad that they did. I love it. I like the fact that it’s a little bit dangerous and it’s challenging and it’s very visual.”

Furman said he currently holds more than 200 Guinness Records, including one for the most Guinness Records.
Furman dedicates all his Guinness records to the late Indian philosopher and spiritualist Sri Chinmoy and has been setting them from 1979 when he did 27,000 jumping jacks. Since then the records have fallen for Furman in countless off-beat categories. From the fastest mile running with a milk on his head, numerous records using a hula-hoop and a pogo stick, to the fastest mile pushing an orange with his nose, these are only a fraction of the over 600 Guinness Records Furman has set though the years.