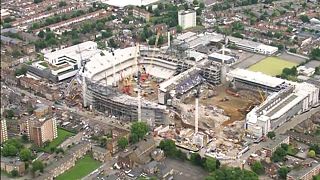 With the end of the 2016/17 English Premier League season demolition work at Tottenham Hotspur’s White Hart Lane stadium has been stepped up.

Aerial views from a helicopter on Tuesday (May 30) showed mechanical diggers churning up the old stadium’s pitch and demolition of old stands beginning.

The new stadium is due to be ready in time for the 2018/19 season with Tottenham playing at Wembley Stadium for their 2017/18 home games.

Capacity at the stadium will be over 61,000 with a single tier end stand that allows 17,000 people to be seated together. The old White Hart Lane capacity was just over 32,000.