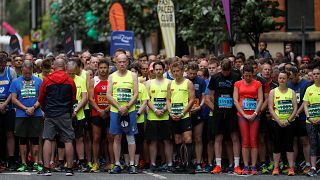 Thousands of runners took part in the Great Manchester Run on Sunday, an annual event that went ahead despite security concerns following the Manchester Arena bombing earlier this week.

The run started with a minute’s silence to honour the 22 victims of the attack and many participants were wearing yellow ribbons to remember them.

Armed police are among the spectators of the run as it is the first major public event in the city since Monday night’s bombing at Ariana Grande’s concert.

A new half-marathon race this year sees close to 10,000 taking to the streets ahead of the main event later in the day.