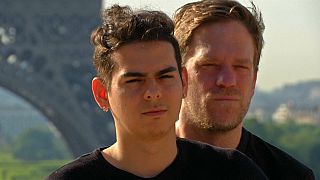 Amnesty International France and LGBTI activists unfurled a banner on Monday (May 29) in Paris, to protest against homophobia in Chechnya as Russian President Vladimir Putin arrived in Paris to meet with his French counterpart Emmanuel Macron.

Activists assembled in front of the Eiffel Tower to hold a banner reading: “Put a stop to homophobia in Chechnya”, as the Russian president was set to meet Macron in the afternoon at the Palace of Versailles.

Russia has come under scrutiny after reports that gay men were being tortured and killed in Chechnya and activists calling for an investigation were arrested by Russian police earlier this month.

Amnesty International in France’s vice-president Cecile Coudriou said she hoped the French president would make the most of the meeting with Putin to ask him to put a stop to the “unacceptable” persecutions.