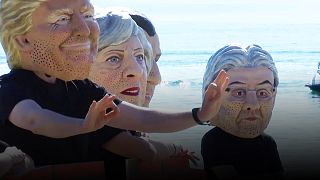 While G-7 leaders were working on their final joint communique on Saturday (27 May), the British charity Oxfam staged a protest to draw attention to migrants, displaced people and refugees.

One or the main topics of the G-7 summit in Taormina is migration, and Oxfam is worried that the approach of the leaders of the seven most developed countries will only be on security and border control.

The International Organisation for Migration calculates that so far more than 60,000 migrants and refugees have crossed the Mediterranean sea to reach Europe in 2017 and more that 1,500 died in the attempt.