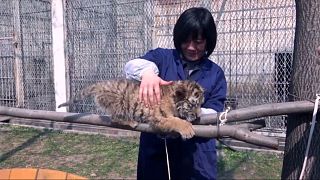 Two female Manchurian tiger cubs abandoned by an inexperienced mother after they were born are now thriving in the Xi’an Qinling Wildlife Park in northwest China’s Shaanxi Province after receiving meticulous care from keepers for almost two months.

The tigress gave birth to four cubs nearly two months ago but half of them died soon after birth due to lack of food and care, leaving the other two trembling and struggling to survive in the cold.

According to the keeper, the two tiger cubs eat six times a day now. When they are six months old, they will receive behaviour training.