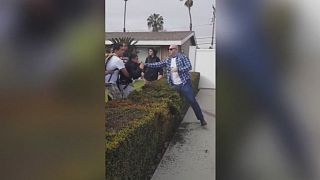 An off-duty Los Angeles Police Department officer fired his gun during a physical altercation with a group of teenage boys in Anaheim on the afternoon of February 21. A statement by Police confirmed that two juveniles had been arrested following a “physical confrontation” with an off-duty LAPD officer, adding that nobody was struck by gunfire during the incident.