Donald Trump became a family man in 1977 when he married his first wife, Ivana, a former Olympic skier from what used to be Czechoslovakia. Together, they had three children: Donald Jr., Ivanka and Eric. Donald and Ivana were married 15 years before their very public breakup in 1992.

The following year, he married Marla Maples, and the couple had a daughter named Tiffany (born in 1993). Donald and Marla’s marriage ended in 1999. Then, in 2005, Donald walked down the aisle for a third time with Slovenian model Melania Knauss. “I’ve always said I’ve been a great father. Less of a good husband,” he jokes. “I love my family”, he told Oprah Winfrey.

Here is a breakdown of the 45th president’s closest family members and – in some cases – advisors: 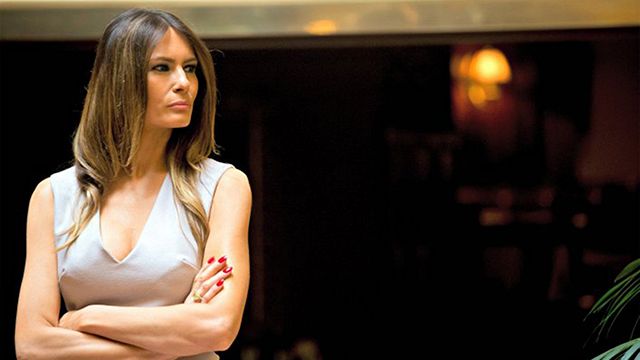 Trump’s third wife, born in 1970 as Melanija Knavs, is a Slovenian former model and mother of his youngest son, Barron. She met Trump in 1998 at the Kit Kat Club in New York, but they broke up when Trump briefly considered running for president in 2000. The pair got back together, and he proposed at the Met’s Costume Institute Gala in 2004. She has a jewelry line and a skincare line, and has kept a relatively low profile during the campaign.

Yet Melania came under fire for plagiarizing Michelle Obama in a speech at the Republican Convention last July and suffers lackluster approval ratings compared to the sky-high popularity of the outgoing first lady Michelle Obama.

It is unclear how public a role Melania will play, though she promises to be a “traditional” first lady “like Jackie Kennedy” and says she wants to advocate against internet bullying and to help women in poverty.

According to Melania’s own account, the Trumps live a successful marriage because they both respect each other. “I give him my opinions, and sometimes he takes them in, and sometimes he does not. Do I agree with him all the time? No. I think it is good for a healthy relationship. I am not a ‘yes’ person,” she told Harper’s Bazaar. “I don’t want to change him. And he doesn’t want to change me.” 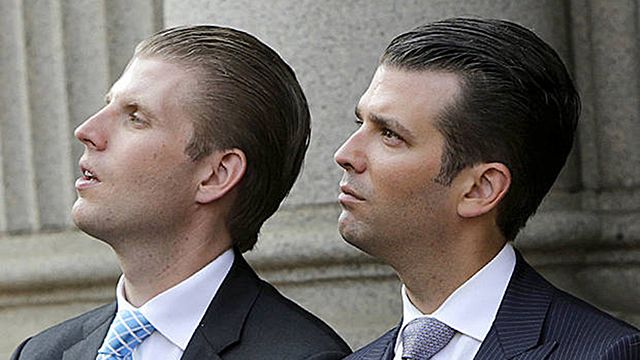 Donald Trump’s oldest sons Donald Jr. (born in 1977) and Eric (born in 1984) with first wife Ivana Trump are businessmen and – until now – executive vice presidents at the Trump Organization (along with their sister Ivanka). They will be officially staying in New York and running the group in their father’s absence.

Technically they are not supposed to discuss business with their father; his refusal to divest completely from the sprawling group has been slammed by an ethics watchdog.

Don Jr. says he and his siblings avoided becoming fodder for gossip blogs by devoting lots of time to working for their father’s business, telling Forbes: “I’m pretty certain that I’m the only son of a billionaire who can drive a D10 Caterpillar better than I can drive a golf cart.” He and his wife Vanessa have five children.

Eric, who is married to CBS news producer Lara Yunaska, has complained about having to cease fundraising for his charitable foundation over fears about impropriety and conflict of interest.

The brothers have courted controversy as hunters, after posing for photographs with dead animals during a trip to Zimbabwe. 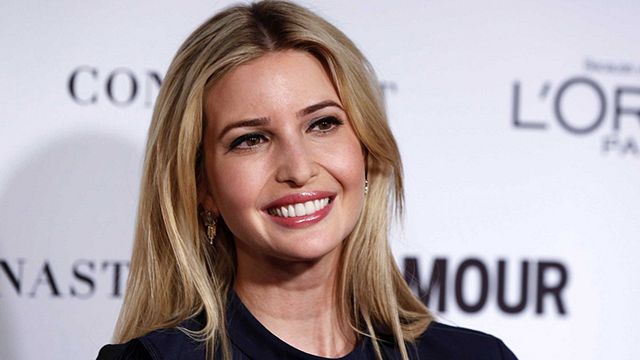 Trump’s oldest daughter Ivanka (born in 1981) is moving to Washington, suggesting that America can expect a prominent first daughter: businesswoman, mother-of-three and favorite child of the incoming president.

No formal role has been announced, but with husband Jared heading to the White House as special advisor and the couple swapping Park Avenue for the capital’s swanky Kalorama district (with the Obama family as neighbors), expect her to take on hostess duties and first lady style causes.

During the campaign she was a key surrogate among women and called for affordable childcare and equal pay — championing traditionally Democratic Party causes.

Ivanka is a conduit to her father, particularly across the aisle, but has come under fire for sitting in on a meeting with the Japanese prime minister and for conflict of interest fears since the election.

Lawyers say she will step down as vice president of the Trump Organization and from running her eponymous fashion company that sells shoes, handbags and fragrance, as well as the Ivanka Trump Fine Jewelry Collection.

Ivanka Trump converted to Judaism in 2009 when she married Jared Kushner, and she says she regularly cooks Shabbat dinner for their family. 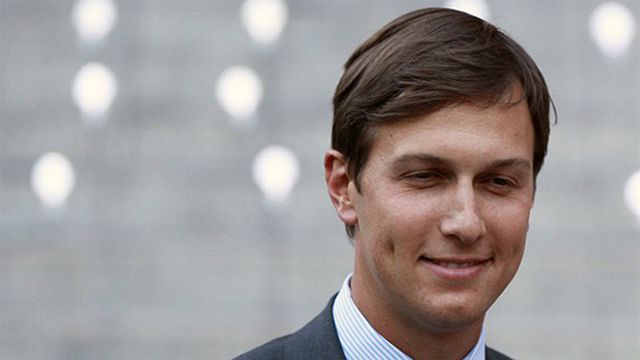 Ivanka Trump’s 36-year-old baby-faced husband has risen stratospherically to become one of the most powerful men in government with a starring role in his father-in-law’s White House.

Kushner is expected to be his father in-law’s point policy person on the Middle East, with Donald Trump even stating he believes Kushner could broker peace between the Israelis and Palestinians.

The Jewish Orthodox grandson of Holocaust survivors, he is considered a calming influence on Trump. Despite concerns about nepotism, his lawyer says he will “divest substantial assets” to comply with federal guidelines.

Credited with being the brains behind Trump’s election, the multi-millionaire scion of a New Jersey family of Democrats married Ivanka in 2009.

Discreet and unflinchingly loyal, Kushner says he underwent a political transformation after seeing Trump’s groundswell of support, defending him against alleged racism and anti-Semitism.

He moved the family real estate business into Manhattan after his father Charles was jailed for tax evasion, witness tampering and illegal campaign contributions. 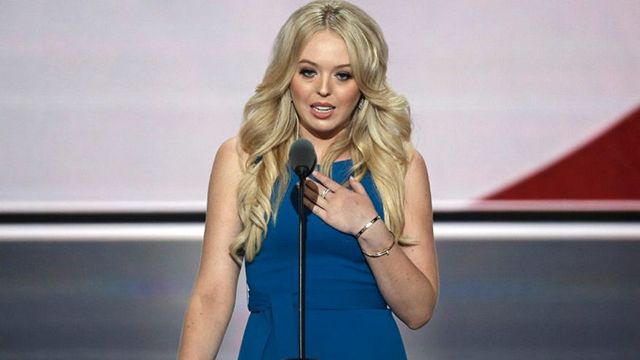 Of all the Trump children, the one most people know the least about is Tiffany, Donald’s daughter with his second wife, Marla Maples. Tiffany — named after the iconic jewelry store in Manhattan — has grown up away from the family spotlight and has usually seen her father only a few times a year. Instead, she has lived quietly with her mother in Los Angeles until her graduation from High School.

Tiffany never regretted growing up away from her paternal family. “It was great for me getting a chance to grow up as a normal kid just out of the spotlight, versus all of them growing up in New York,” she says. “They always had that intense media and spotlight on them.”

Tiffany is a 2016 graduate of the University of Pennsylvania, her father’s alma mater, where she double-majored in sociology and urban studies. She entered the public consciousness when she spoke on the second night of the 2016 Republican Convention in Cleveland.

During her speech, Tiffany made light of her unfamiliarity with the situation, stating: “When I graduated college a couple of months ago, I never expected to be here tonight addressing the nation. I’ve given a few speeches in front of classrooms and students, but never in an arena with more than 10 million people watching.” 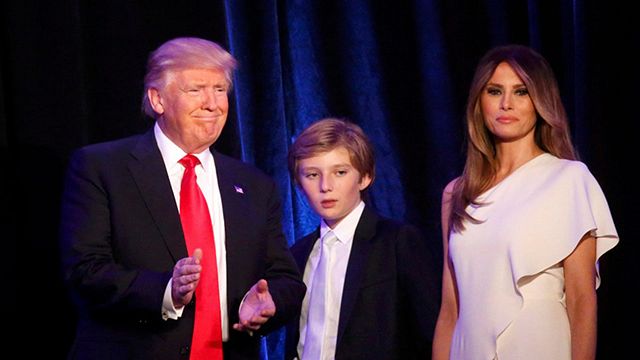 Donald Trump’s only child with Melania is 10 years old and lives in the family penthouse with his mother in New York. Between his mom, a model, and his sister Ivanka, a fashion designer, Barron is fashion-forward for an elementary school kid: Melania has said that he’s “not a sweatpants kid,” but likes “to dress up in a tie sometimes like Daddy.”

Barron was frequently absent from the campaign trail, since he was busy with his homework for his private school. Trump has said that Barron and his mother will initially stay in New York until the school year is over. After that, Barron will be the first pre-teen son to live in the White House since John F. Kennedy, Jr.