On the eve of the World Economic Forum in Switzerland – where the world’s fiscal heavyweights will discuss financial inequality – Oxfam have a released a report which sheds light on the gaping disparity between the world’s rich and poor.

You could get the number of billionaires that have the same wealth as half of the rest of the world on one golf buggy.

The gap, which the charity says is continuing to widen, exposes and criticizes what Oxfam calls an “indecent” concentration of wealth in the hands of a tiny minority, with just eight men owning the same amount as the poorest half of the world’s population.

“We have an economic system that is warped out of shape which means that the 1% benefit, said Oxfam’s Director of Campaigns and Policy Matthew Spencer.

“It’s designed to benefit the 1% rather than the 99%, which is why you could get the number of billionaires that have the same wealth as half of the rest of the world on one golf buggy.” 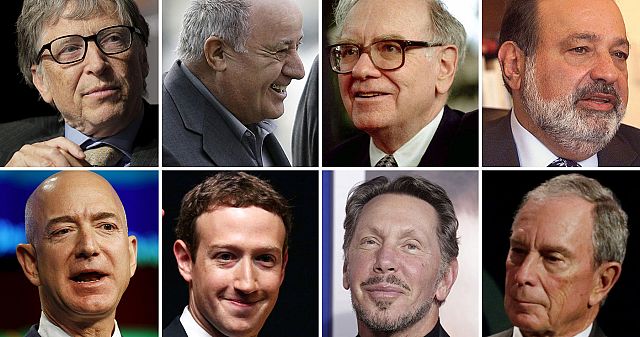 Between them they have more combined wealth than the poorest 3.6 billion people in the world put together.

Despite Bill Gates efforts to give much of his wealth away through his philanthropic work, Oxfam doesn’t believe this addresses the fundamental problem.

The charity is calling for a crackdown on the tax dodging and “super-charged” shareholder capitalism that sees the rich stay rich and the poor, poor.

Policy advisor for Oxfam, Max Lawson said: “Many, many billionaires pay hardly any tax, using tax havens to hide their money away… We’ve got a situation where billionaires are paying (proportionally) less tax often than their cleaner or their secretary. That’s crazy. We’re seeing wealth channelled upwards.”

He urged billionaires to “do the right thing”, and to do “what Bill Gates has called on them to do, which is pay their taxes”.

While many workers are struggling with stagnating incomes, the wealthy of the super-rich has increased by an average of 11 percent a year since 2009.

Tax havens which allow the wealthy to chop millions off their tax bills, has a knock-on effect on the poor.

In Kenya, for example, the effects of the growing disparity between the haves and the have nots are devastating.

While the wealthiest person in the country is worth over $700 million, 42 percent of Kenya’s population live below the poverty line.

Although over 2 million are forced to work off the books, without any services or protection in order to earn a living, ironically, Kenya’s economy is booming – boosted by big businesses coming coming to Nairobi to enjoy the tax incentives that are depriving the country of vital revenue.

“Inequality is definitely getting worse in a lot of countries and you’re seeing the super rich, in particular, move away from the rest of society and that’s really harmful,” Spencer said.

However, all is not lost, according to Lawson.

He says that “inequality is not inevitable” and that it “can be fixed” with relative ease – the simple solution being: “get the rich to pay their tax.”