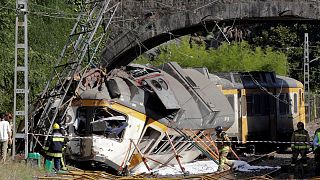 A passenger train derailed in Spain’s northwestern Galicia region, killing four people and injuring 47 others who were taken to hospitals, authorities said.

The Galician regional government said the accident occurred in Porrino, about 450 kilometers (280 miles) northwest of Madrid.

The train was traveling from Vigo to Porto, in neighbouring Portugal. It belonged to Portuguese rail company Comboios de Portugal.

Adif railway infrastructure company said it has opened an investigation.