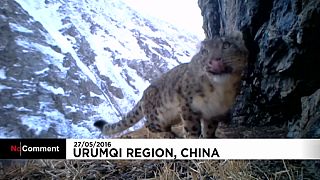 Rare footage has been captured of snow leopards in northwest China.

They were captured by infrared cameras mounted by volunteers in the eastern tail-off of the Tianshan mountain range.

There are thought to be 5,000 wild snow leopards roaming the Tianshan, Pamir Plateau and Himalayan mountain ranges. But endangered snow leopards are long known as solitary and unsociable animals, hiding themselves always in mountains and usually above the snow line.