How can refugees’ basic needs be secured? Food, for example. Our new programme Aid Zone goes to the country with the highest number of refugees in the world, Turkey. We travel to Gaziantep, about 100 kilometres from Aleppo.

The burden of neighbourhood

The war in Syria has entered its sixth year leaving hundreds of thousands of people dead. It has caused the world’s largest humanitarian crisis since World War II.

Six and a half million people are internally displaced and nearly five million have registered as refugees in the neighbouring countries.

Turkey has today the highest number of refugees in the world, 3.1 million, of which 2.7 million are Syrians.

Kahramanmaraş is one of Turkey’s 26 refugee camps. It is considered a model in efficiency and conditions. Mostly Syrians live here. It was opened in 2012 and many families have never left. There are 19,000 residents, other camps can reach 30,000.

There is plenty of food, thanks to international donors and local government. Three years ago residents like Salwa started receiving e-Food cards.

The value of independence

“With the card we are better off. Before we used to receive hot meals but many times my children couldn’t eat them. The card is easier, I can buy what I like and cook what my family likes our way. I come 5 times a week and I spend between 100-125 liras”, (roughly 30-40 euros), says Salwa.

The World Food Programme found that the best way to use international funds was the e-Food Card programme, launched with the Turkish Red Crescent in 2012. Each family receives a card that works like a debit card, automatically uploaded twice a month. It is now used in 11 camps by over 156,000 people. One donor is the EU’s Humanitarian Aid Department.

“Specifically with the World Food Programme in the last 12 months we have put more than 40 million euros into this e-voucher scheme and of course in the next few months we will try to expand this to more than 5 or 600,000 people. The more we find out where the beneficiaries are, what their needs are, and who is in need of assistance, the more people we’ll have on the scheme,” says the EU Humanitarian Aid Communication Officer Mathias Eick. 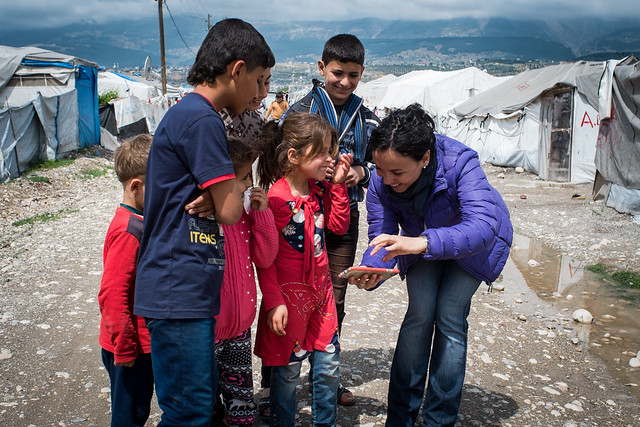 “This refugee camp is like a little town that got to its maximum capacity. People who live here have secured food and health assistance. What about the 90% of Syrians who live outside camps? To understand that, we moved even closer to the Syrian border, to Gaziantep,” says euronews’ Monica Pinna.

Two steps from a war zone

Gaziantep has over a million and a half residents and over 325,000 refugees. It is about 100 kilometers away from one of the most hard-hit Syrian cities, Aleppo. Many of its residents come from there.

Districts like this in Turkey have become the focus of humanitarian officers’ work. Since last year the e-Food card also began to be distributed outside the camps. Ninety thousand people have received help so far.

The identification is a massive job and is still ongoing. Field monitors have found that almost one third of off-camp Syrian households are food insecure.

“We visit this area every three months, so we wait for all the people to have IDs, then we’ll come again and register them,” says Hala. A systematic monitoring of card beneficiaries is also in place.

Fatma Tuba is a mother of five from Aleppo. She arrived in Gaziantep two and a half years ago. She received her card a few months after the off-camp project started.

“Our conditions have improved, we are better now. I received the card nine months ago and that has allowed us to buy what we need. You can always do better, but it’s fine,” she says.

EU Humanitarian Aid has backed the programme as it is a quick way of delivering assistance, it gives refugees the dignity of choosing their food and also boosts the local economy. It works with a selected list of local shops which are constantly monitored.

Steering aid into the local economy

The card is uploaded off-camp with 62 Turkish Lira per person per month, about 19 euros. It provides each person with an average of 2100 calories per day. Sweets, alcohol and cigarettes are forbidden.

“There are 25 markets participating in our programme in this province. Price monitoring is on a monthly basis so we can make sure that our beneficiaries have good quality products at good prices,” insists Hala.

Families like Fatma’s are the lucky ones. Over 500,000 Syrian refugees are still waiting to be reached by the programme and many others that do not meet the criteria are still in need of assistance.

The WFP is planning to reach 585,000 people off-camp in the coming months.