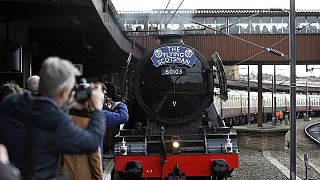 The Flying Scotsman – one of the world’s most famous steam locomotives – set off from London on Thursday on its first journey following a 10-year refit.

Thousands turned out to watch the train as it left platform one of London’s King’s Cross station for the east coast main line journey north to York.

Aboard the train for the five-hour trip were 297 VIPS, fund-raisers and people who had won a competition for a seat on the train.