But how does the European version compare to its longer-established American counterpart? In many ways it is like comparing chalk and cheese in terms of style, but some of the differences are worth noting. We have taken Obama’s last SOTU speech and that given by Jean-Claude Juncker in Strasbourg last September to compare the two mens’ styles.

This was Obama’s last State of the Union speech; he does not need to win over voters any more, which allowed him to be speak in more general terms rather than about specific policy. As he told Congress: “I don’t just want to talk about the next year. I want to focus on the next five years, ten years and beyond.” Obama also used the occasion to look back at what he regards as his biggest achievements during his tenure at the White House, referring repeatedly to the “(progress of) these past seven years.” The general message is therefore one of optimism and opportunity: “Let’s make America the country that cures cancer once and for all.”

Obama Praises Own Strength, Resilience In Face Of Hardship During State Of The Union https://t.co/CamDGE8iRApic.twitter.com/p2xVFIvw5r

For Juncker on the other hand this was his first SOTU, having just taken the helm of the European Commission. His task was to set out an agenda for his mandate, outlining ways in which the EU can be improved. He is more at liberty to talk about the failures of the past, because they occurred under someone else’s watch. The message is blunt and more gloomy: “Our European Union is not in a good state.”

Obama’s speech is perhaps an easier one to deliver than Juncker’s: a renowned orator, the American president is speaking one language, his mother tongue, and is aided by autocue. With heckling extremely rare in SOTU speeches, he can also count on being largely uninterrupted. As a result Obama delivers a speech of 5,481 words in 59 minutes.

Juncker has a much tougher gig: for a start the speech he has written (or has had written for him) is twice as long – 10,031 words – and is given in German, English and French. And not only does he need to deal with the heckling of some MEPs (notably on this occasion Nigel Farage), he is also confronted by one Italian Northern League member who approaches him wearing an Angela Merkel mask. As a result, he ends up having to cut his speech short. Even after spending more than 81 minutes on his feet, he was unable to complete his address.

Obama makes frequent references to historical figures, the great Americans of the past: Lincoln, Washington, Roosevelt, Edison, Luther King, the Wright Brothers and Sally Ride (America’s first female astronaut) among others. He is sparing with numbers though: in his 5,481 words there are just a dozen statistics, with most of those rounded up or down.

#SOTU: “That spirit of discovery is in our DNA . . . We’re Grace Hopper and Katherine Johnson and Sally Ride.” pic.twitter.com/Wg6VEIEIW6

Juncker doesn’t make references to the people who have shaped Europe’s history. The names he drops are contemporary members of Parliament or the Commission: the likes of Schulz, Mogherini and Timmermans are not household names outside Europe’s institutions. He also cites plenty of precise numbers and statistics (52 references in 10,031 words), including “122,000 lives”, “0.11% of the EU population”, or “3.41 billion euros”.

The words each man uses highlight the contrast in style. The wordcloud for Obama’s speech (below) brings out more ‘active’ words. His most frequently referenced key words are: America, can, world, will, people, work, years, make and just (in the sense of ‘fair’). The word ‘Love’ even gets five mentions. 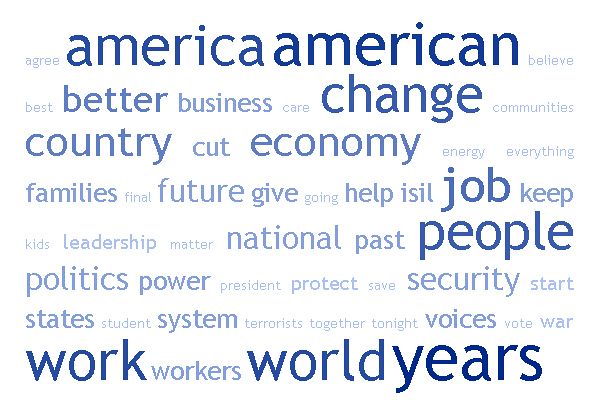 Juncker’s language is far more technical, less emotive; there is no reference to ‘Love’; ‘need’ comes back twice as often than ‘can’, and the most common words in his wordcloud are: European, Union, Commission, member, Europe, states, Greece and euro. In terms of grabbing his audience, note this startlingly unexciting phrase which kicks off his speech: “The State of the Union address is foreseen explicitly by the Framework Agreement that governs the relations between the European Parliament and the European Commission.” Compare that to Obama’s opening joke: “I know some of you are antsy to get back to Iowa.” 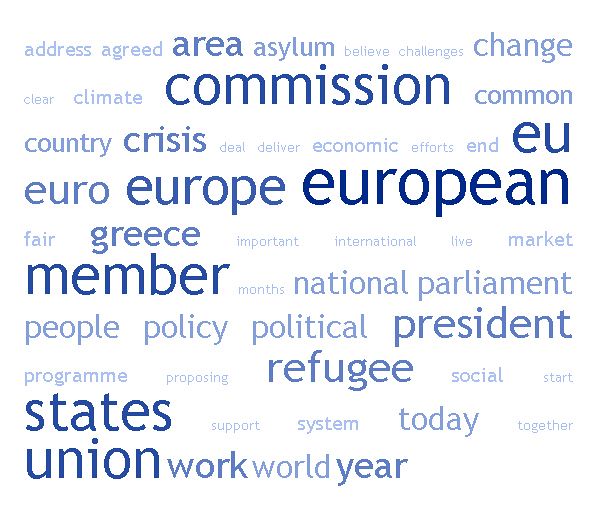 Both trained orators, Obama and Juncker use the same tried and tested techniques for effect. One such technique is repetition.

Juncker repeats the phrase “Have we forgotten…” to drum home his message about the need for compassion towards migrants.

Despite their differences in style, emphasis and language, the two leaders converge with their conclusions. Both look to the future and aim to strike a chord highlighting optimism, confidence and strength.

Obama is “optimistic that unarmed truth and unconditional love will have the final word. That’s what makes me so hopeful about our future. Because of you. I believe in you. That’s why I stand here confident that the State of our Union is strong.”

As for Juncker, he imagines a time “when, generations from now, people read about this moment in Europe’s history books… Let it read that we forged a Union stronger than ever before. Let it read that together we made European history. A story our grandchildren will tell with pride.”