The 82nd National Coffee Growers Congress held in early December in Bogota took into account the difficulties facing the sector. Colombia is the third largest exporter of coffee, according to the World Coffee Organization (ICO), yet industry professionals there are concerned about their future.

Colombia must overcome the lack of labour at harvest, caused by a significant rural migration and the flight of workers to the booming construction sector. It must also deal with the fall in coffee prices on the international markets and with the damage caused by the El Niño weather phenomenon: floods, mudslides and drought periods just to mention a few. These problems will be on the agenda at the Fourth World Coffee Conference that will be held from March 6 to 11, 2016 in Addis Ababa, Ethiopia with countries that are representing 94% of world coffee production and over 75% of world consumption.

Coffee production provides a living for more than 500,000 Colombian families. The largest plantation in the country covers 10,000 hectares and is located near the city of Medellín, about 500 kilometers northwest of the capital. This area between Medellín and Bogota is known as the Coffee Triangle.

These photos were taken in the family farm of local ‘Finca’, Don Elias. On its four hectares of land, eight people work full-time at the harvest, which takes place twice a year. 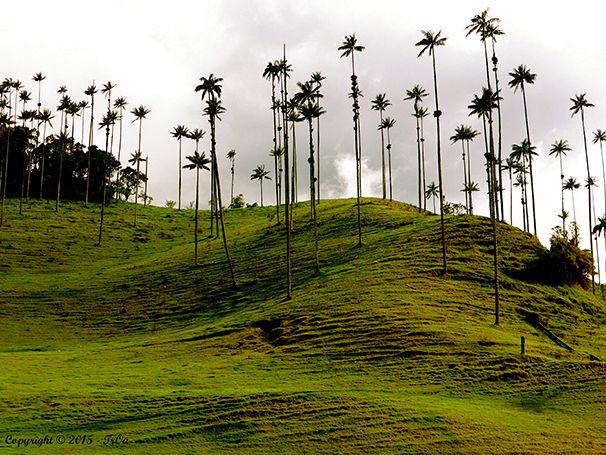 Nestled in the heart of the coffee zone, the Park of Cocora, the giant, centuries-old palm trees can grow up to 70 meters high. Part of “The Eje Cafetero” or coffee zone and plantations are UNESCO World Heritage sites. 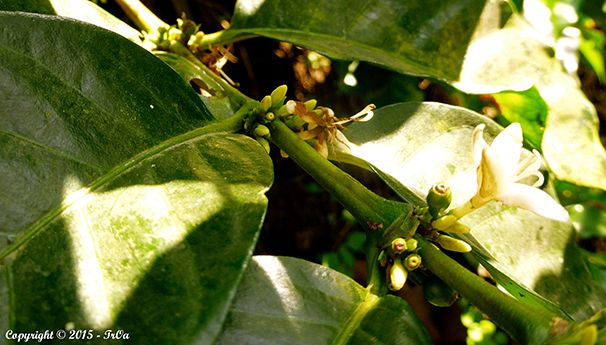 From flower to coffee… “Tinto Colombian”: the white flowers of a coffee tree have a very short lifespan: a few hours to five days. They are hermaphrodite flowers with an odour of jasmine. 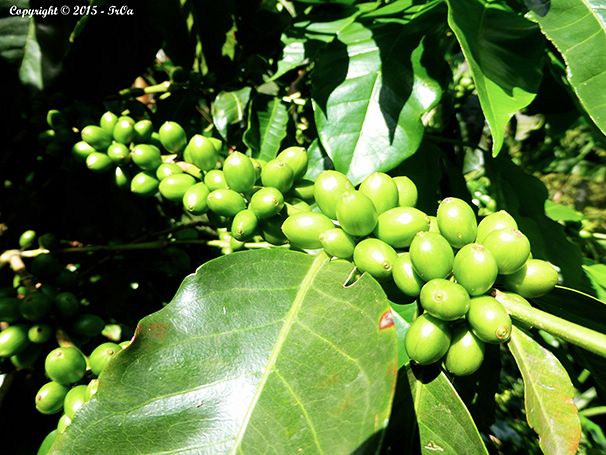 These flowers give birth to small fruits called “cherries”, they are future coffee beans. It takes six to nine months for them to mature. 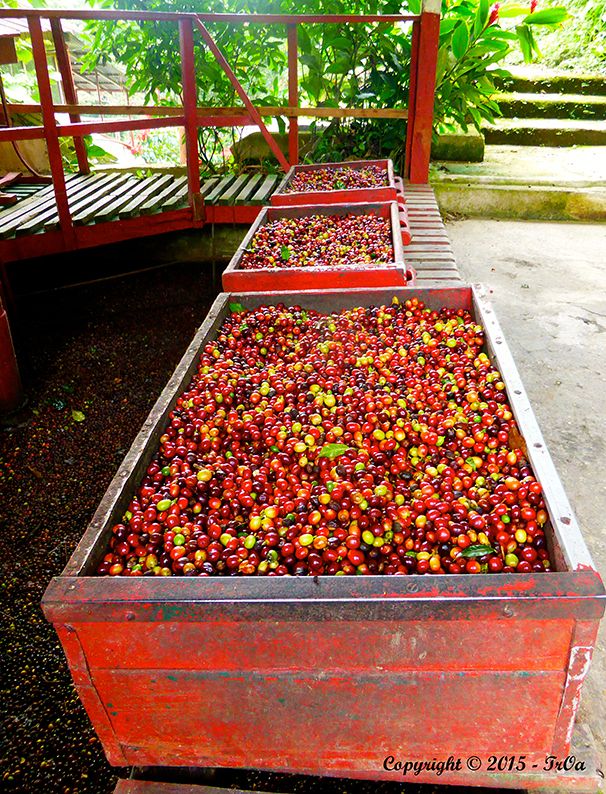 There are over 200 varieties of coffee in the world, 15 of them in Colombia. The Finca Don Elias produces two kinds: Arabica, which gives red fruit and Columbia, found only in that country, produces yellow fruits. The only difference is the color. Taste and quality are identical. 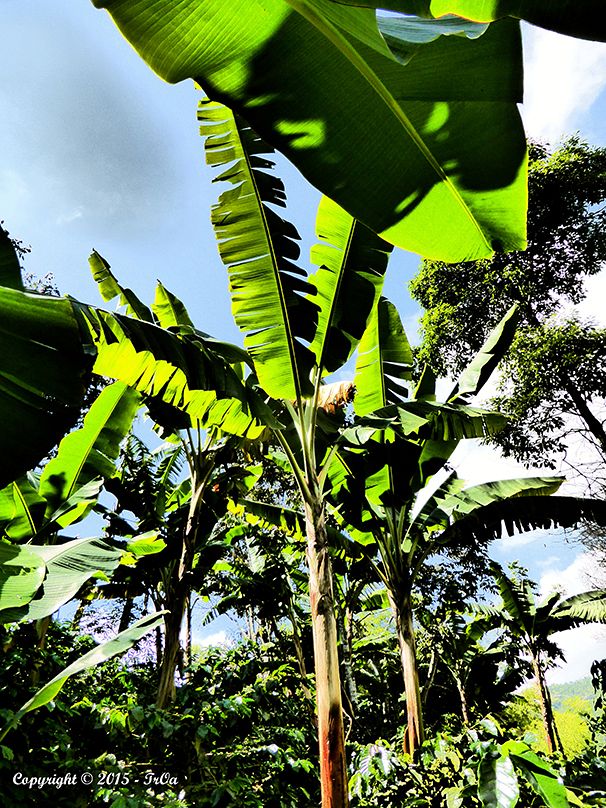 Other plants are essential to the culture and growth of the coffee plant. Bananas punctuate the coffee plantations because they are full of water and help, particularly during droughts, to keep the soil moist and provide the coffee trees with water. Their main branches are also used to shade the plants and protect shrubs from the sun. Yucca stabilizes the ground while pineapple attracts insects, preventing them from attacking the coffee trees. 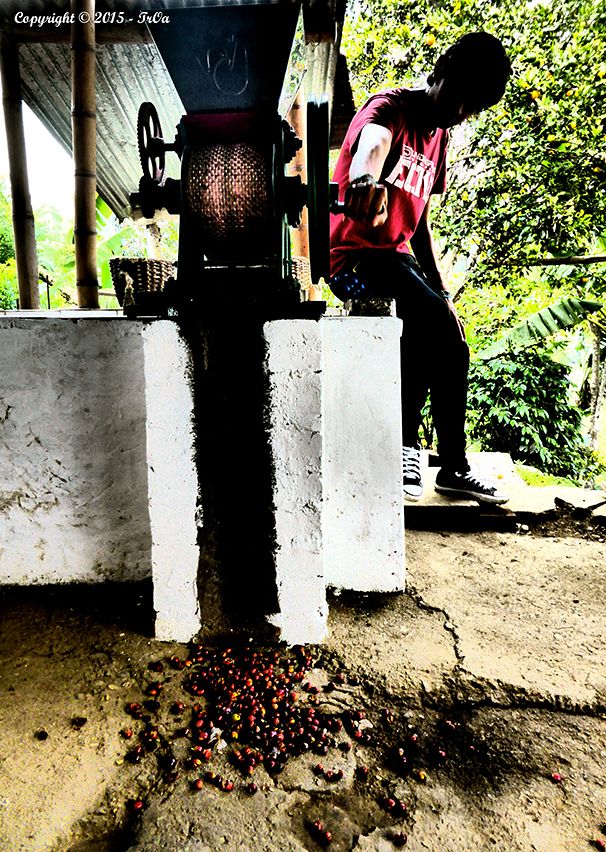 After the fruit has been harvested and sorted, its fleshy part is removed and the grain is collected. Even a few years ago everything was done by hand. Today the craft machines churn out a kilo of coffee beans in 10 minutes. 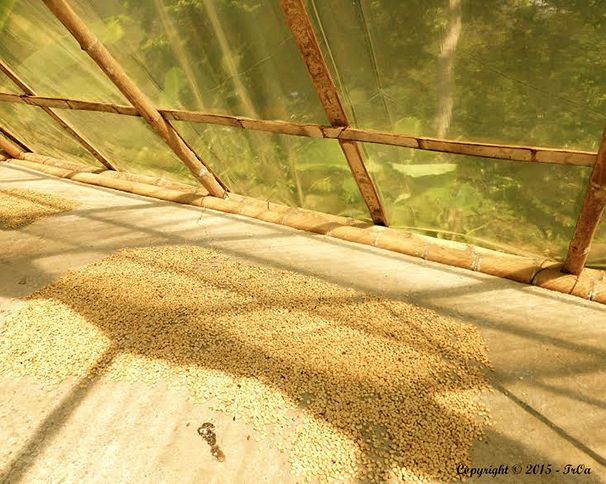 Then the gains are washed by being immersed in running water tanks. Lower quality grains float on the surface, making waste easy to eliminate. After being washed grains must dry. Eight days of exposure to sufficient summer sunshine in the greenhouses should be enough, but it takes a 25 days in the winter, during periods of heavy rain. 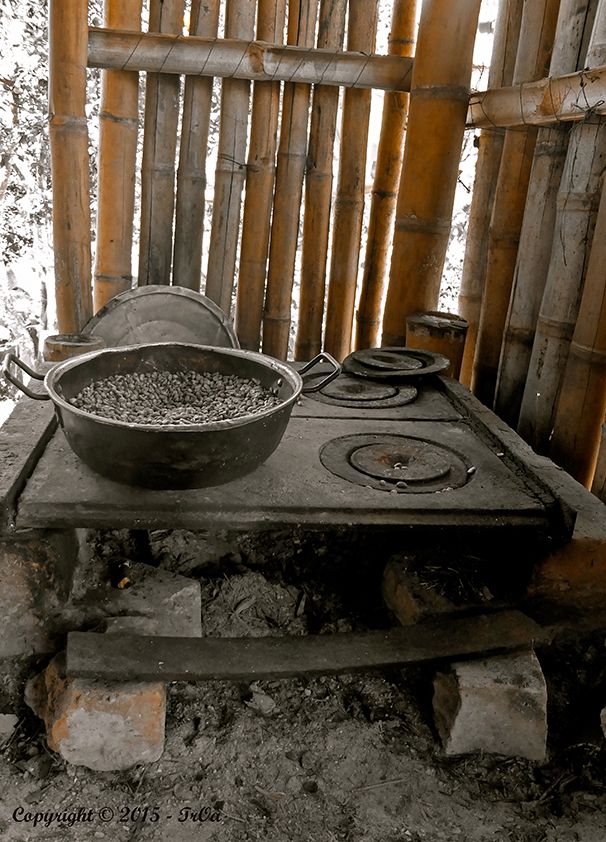 After drying comes the delicate process of roasting…

…to release all the aromas of coffee.