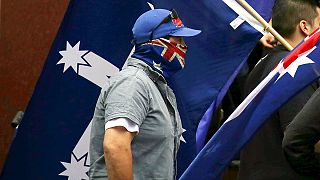 Clashes amid protests over immigrants in Australia

Scuffles broke out in Australia as anti-Muslim and anti-racist protesters clashed in the Australian suburb of Melton near Melbourne.

The far-right Reclaim Australia movement organised the protest to demonstrate against Muslim immigration to Australia.

In response, far-left anti-racist group No Room For Racism conducted their own counter rally.