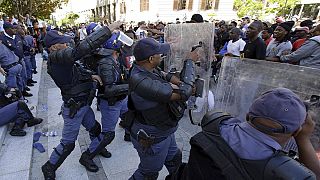 They were trying to disrupt the reading of Finance Minister Nhlanhla Nene’s interim budget.

The speech was delayed as opposition MPs argued the budget should be delayed because of a spate of student protests over a hike in tuition fees.

University bosses said the increases were needed to maintain standards, and called on the government to find the extra funding.