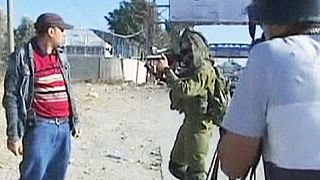 A video, shot by Palestine TV during a West Bank protest, shows a Palestinian man, after scuffling with several soldiers, being hit with a rifle butt and wrestled to the ground. The unarmed protester was also punched and a soldier’s knee was pressed against his head before he was handcuffed and taken away. The soldiers have since be summoned to their brigade commander for a debriefing as their behavior, “based on preliminary investigation”, has been judged to be “inconsistent with that expected of IDF (Israel Defence Forces) soldiers,” the military said in a statement.