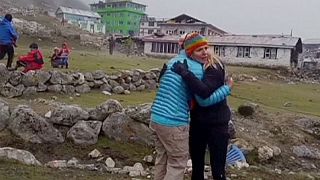 Video filmed by US mountaineer Kevin Krogh shows the moment Nepal’s 7.8-magnitude earthquake hit the village of Kyanjin Gompa in Langtang National Park on April 25. Kyanjin Gompa is just a few kilometres from the small village of Langtang, which was entirely destroyed by a landslide that followed the earthquake. The video shows Krogh’s wife, Kat Heldman, going into their tea house and helping a member of their climbing party to safety.