As you settle into the weekend, you may be enjoying a glass of wine. But have you ever wondered what goes into it? Well, a Chianti producer in Tuscany now claims to have traced the grape “every step of the way, from our organically-farmed vineyards, to the bottle.” This means the Fattoria Casabianca vineyard has made the first ever Chianti that is certified ‘suitable for vegans’.

Next Sunday, Tesco will be closed. From then on, every Sunday will be gloomy.

Beginning with the 2014 harvest, it claims, the entire line will also be ‘cruelty-free’. But, don’t worry, the prices are said to be staying the same!

Palestinian Territories: Taking a walk on the wild side

Gaza Zoo is alleged to have sold two lion cubs to a man from Rafah. The cubs are now living in the family home, side-by-side with their new owner’s six children. While neighbours fear the family could soon be in danger, the children reportedly seem happy to play with the big cats, for the moment. 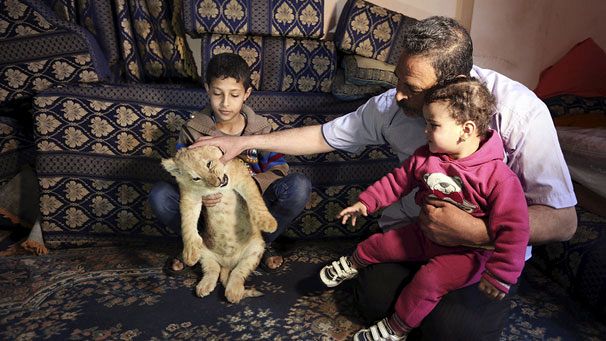 Germany: Straight down the line

Lemonade, anyone? Perhaps ‘anyone’ is not the right word, as German lemonade brand Phantasia has faced allegations of homophobia this week.

The company sent flyers to bars to advertise a deal on its lemonade. A bar in Stuttgart with a mostly-gay clientele responded to the offer, thinking it would be sent some free samples.

But the company didn’t initially deliver the lemonade. Instead it replied to Boots Westernbar with a note saying its research concluded that homosexuals weren’t part of its target audience.

The bar created a Facebook campaign later called ‘Did you know there is a lemonade only for heterosexuals?.

Bahadır Baruter and Özer Aydoğan were arrested for the August 21, 2014 cover of the magazine, which satirised Erdogan’s election to the presidency.

Since the election, more than 70 people in Turkey have been prosecuted for ‘insulting’ Erdogan.

In Hungary, recently-imposed legislation has curbed shopping in larger retailers on Sundays.

The move has drawn criticism and provoked a satirical, shopping-based re-hash of the 1930s song ‘Gloomy Sunday.’ Its bleak lyrics earned the song the nickname the ‘Hungarian suicide song,’ leading to the myth that people went on to kill themselves while listening to it.

One of two new versions features the lines:
“Next Sunday, Tesco will be closed. From then on, every Sunday will be gloomy.”

And there’s even a mournful violin solo included.