Merve Buyuksarac, a model crowned Miss Turkey in 2006, faces up to two years in prison for sharing a satirical poem deemed critical of President Recep Erdoğan by the authorities, her lawyer said.

Buyuksarac was detained last month for sharing the post on her Instagram account, the Associated Press reported. Buyuksarac denies insulting Erdogan. A court will decide whether to start proceedings.

According to Turkish media the model shared a poem adapted from the lyrics of the Turkish national anthem that reportedly features insults targeting Erdoğan.

“I don’t precisely recall the content I have shared on my Instagram account. However, I might have taken excerpts from Twitter, other social media websites or the cartoon magazine Uykusuz,” the former model, who now works as an industrial designer and writer, told an Istanbul prosecutor. “I did not personally adapt the poem titled ‘The Poem of the Chief’. I shared it because it was funny to me. I did not intend to insult [the Turkish president].”

The Hurriyet daily News reported that the prosecutor’s accusation underlines that “the remarks shared by the suspect could not be considered within the terms of freedom of expression.”

Fears for freedom of expression

Buyuksarac is one of the most recent cases of Turkish citizens in trouble for speaking openly about Turkey’s president, amid fears of tightening restrictions on civil liberties. Bloomberg reports that since Erdogan was elected president in August, 67 people have been charged with insulting him, about one case every three days.

Turkey’s head of state also has a difficult relationship with social media. In March 2014, while prime minister, he tried, and failed, to ban Twitter. Turkey’s Supreme Court struck down the vote after the presidential election. However, in the second half of last year, Turkish authorities issued the most requests for removal of content on Twitter, according to the social network’s privacy report. With 477 requests, Turkey is far ahead of Russia (91) and Germany (43), respectively second and third. 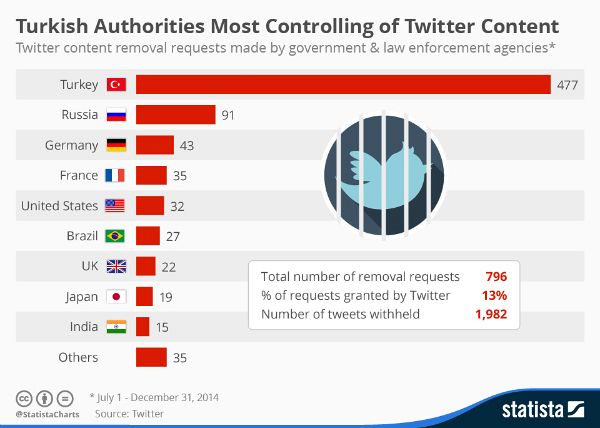 Press freedom in Turkey is also under scrutiny. On Thursday, the editor-in-chief of the Cumhuriyet newspaper, indicted for insulting Erdoğan with his coverage of a corruption probe implicating some in the president’s inner circle, told the press : “Standing trial has become the nature of the profession (…) “Erdoğan is pursuing a policy of coercion by pushing for insult cases against every piece of criticism. He is trying to punish everyone who raises their voice in the media, which is already under siege. But you will see that it will be fruitless. Because we will continue to speak, continue to write.”

Reporters without borders, in 2015 Turkey ranks 149 out of 180 for press freedom and democracy watchdog NGO Freedom House rated Turkey Not Free in Freedom of the Press and Partly Free in Freedom on the Net 2014.