German Chancellor Angela Merkel and Paris Mayor Anne Hidalgo were edited out of a picture of the Paris march against terror by an ultra-Orthodox Israeli newspaper.

The Israeli Haredi daily HaMevaser also took out Swiss President Simonetta Sommaruga and managed to crop Federica Mogherini, the High Representative of the European Union for Foreign Affairs and Security Policy, out of shot. The daily newspaper often edits women out of pictures for reasons of modesty. 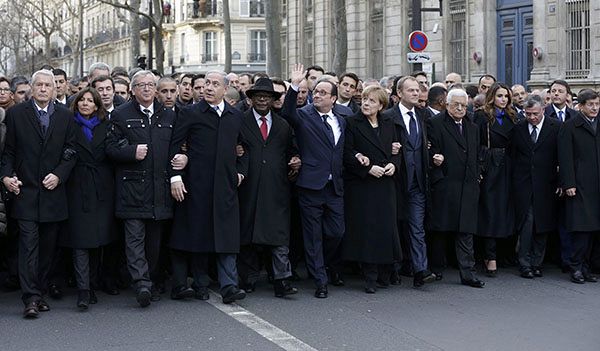 Mahmoud Abbas, the Palestine President, made it into the newspaper’s picture but was surreptitiously cropped from a tweet sent by the Israeli Prime Minister, Benjamin Netanyahu. The two were separated by just four world leaders but he was not included in the Israeli leader’s message about unity.

I marched in one row with world leaders in order to unite against terrorism. Any terrorism must be fought to the end pic.twitter.com/X5oFg5r3cB

Netanyahu was allegedly asked by French President François Holland to stay away from the protest and an invitation was not extended to him. Paris was wary of attention being drawn to other issues, such as the Israel-Palestine conflict. As such Abbas was not invited either. According to sources, Netanyahu invited himself when he heard that other senior Israeli politicians would be attending the march. The French subsequently invited Abbas.

Netanyahu was criticised for elbowing a female French minister to jump the queue for the bus transporting dignitaries to the march. He was also said to have barged his way past the president of Mali to make sure he was in the front row of world leaders.

Haaretz, an Israeli news website, said: “There was nothing further from Parisian manners, refinement and style than the behaviour of Netanyahu.”