In the past five years the use of dozens of new synthetic, so-called ‘designer’ drugs has been on the rise. They are cheap and easy to get hold of, making them increasingly popular among youngsters. And very dangerous: even medical experts do not fully understand the consequences on users’ health. New-Zealand has introduced a new way to combat these designer drugs – it legalised them.

“Euphoria is the best word. You become open, easy, balanced. You need to have more and more. Then, next, you get terrible headaches, and you don’t even know why you would want to take it again.”

“While being on it, it was quite good, but the next day, horrible,” says a young couple in their twenties, after trying the so-called KATI.

KATI – officially mephedrone, 4-methilmethcathinon (4-MM), a drug classed under amphetamines and cathinones, an emerging type of designer drugs used for its psycho-stimulant qualities. Earlier they were used as a mood-stimulating medicine. It can appear in the form of capsule, tablet or micro-crystal, and can be taken orally or intravenously.

There are three main factors behind its popularity: one is that in 2008, the ecstasy-market collapsed in Europe. MDMA was more difficult to obtain, so party-drug users had to find something new. Legal at first, synthetic cannabinoids, amphetamines and cathinones soon became a hit on the drug scene. In 2009, the fourth most popular street-drug was KATI, or to give it its innocent street name in the UK, ‘Bath Salt’. In Hungary it appeared in 2010 and spread fast.

The emergence of designer drugs became possible because countries’ laws were not able to adapt fast enough, and criminalising them took some time. In the meantime they remained on the market, cheaper than alcohol. Mephedrone, crystal and other designer drugs could be ordered over the internet. Shops sold them as bath salts or plant fertilizers, although clearly labelled as ‘not for human consumption’ and ‘not to be sold to under 18s’.
Of course most people knew they were not bath salts and were intended for human consumption.

Why are they called designer?

Designer drugs are produced to substitute their banned, illegal counterparts. For the authorities, it takes some time to analyse the new drug; during this process, the new drug is put on a so-called ‘C-list’, temporarily criminalised. At this point, the “chemists” simply come up with a new version of the drug; they simply make a small change to the molecular structure and the modified drug can go to market. The new design has more or less the same effect but does not yet appear on the list of banned chemicals.

What is the 'C-list'?
Based on the British model, the C-list is a list of substances that are banned on a temporary basis. New drugs can be fast-tracked onto this list.

The list includes substances that induce dependence, cause excitement or depression of the central nervous system, trigger hallucinations or disorders in movement, in judgment, in behaviour, in perception or in mood, where there are reasons to believe that the material opens the door to misuse resulting in public health and social problems.

Some people believe alcohol should be added to the list. Materials are added to the list not only individually but also as a group of substances with a generic formula. Marketing, distribution, production, import and export of the C -listed substances in Hungary is punishable by up to three years imprisonment. Using the drug is also penalised.

In 2008 only 13 such drugs were registered. In 2009 the number was 24, while in 2010 it had gone up to 41. Eight more were added in 2011 and by 2012 the list contained 73 drugs. The competing drugs – mephedrone, methylone and MDPV – were not able to attain the popularity of ecstasy, and replace it on the market, simply because they changed too often. As soon as one was banned, another came along to take its place.

In 2011, when mephedrone and crystal were criminalised, Methylone (bk-MDMA) and MDPV appeared almost immediately. The game of cat-and-mouse between drug dealers and authorities became never-ending. 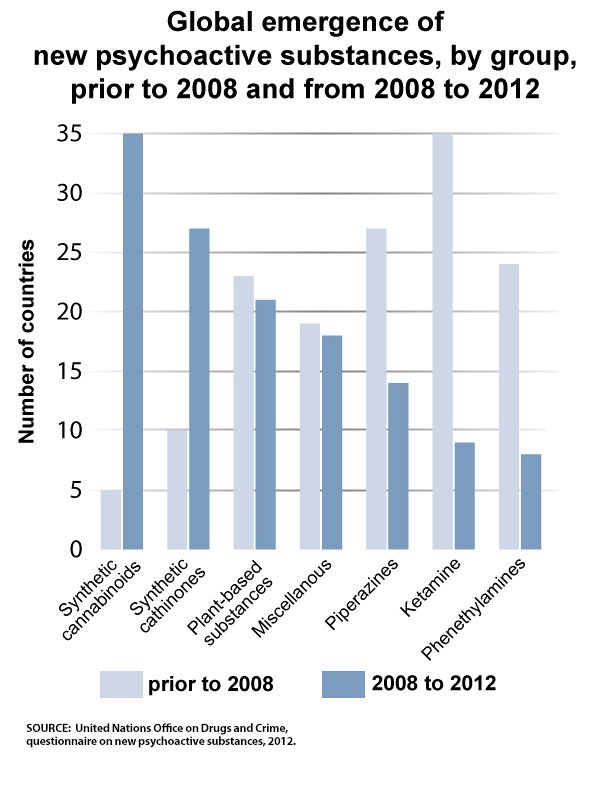 The dark side of the new drugs became apparent as more and more people were taken to hospital suffering from toxicological symptoms such as dehydration. As these new drugs mimicked the effect of heroin, many heroin addicts turned to the cheaper synthetic drugs. The ease with which they could be obtained also meant they caught on with people who had previously been deterred by either the law or by the price. In most cases, and as with most illegal drugs, users had little idea exactly what they were taking.

“I’ve never felt so shitty before. I tried all sorts of things, I’d been taking KATI on a regular basis for half a year and no one told me this new stuff had anything to do with KATI, so I pushed 1 gram for the first time. I thought I would die. I felt like my heart stopped, I was in a brutal paranoid state. I could neither sleep nor move because of the trembling… While I was sweating I was cold and I was laying with wide-open eyes in total silence, hiding under a blanket trembling from fear” – experience of a MDPV consumer.

The descendant of KATI and crystal, MDPV, has an effect somewhere between that of speed and ecstasy. A feeling of euphoria, high pulse rate, sweating, ‘feeling high’ – this state of mind and body lasts for a few hours, but high blood pressure and a fast heartbeat rate could last for half a day, keeping the user wide awake. Many overdosed because the ‘high’ would require a smaller amount than from other drugs. Some users have experienced severe episodes of psychotic behaviour; paranoia, extreme anxiety and hallucinations can result in aggressive, even homicidal behaviour. The long-term effect is not yet known.

- “Today, many people are afraid even of prescription medicines and pills despite the fact that they go through a long process before becoming officially a medicine, says Gabor Csukly, a psychiatrist for Index, the Hungarian online journal. – Those, who swallow MDPV or any other new drug, are voluntary guinea pigs. We do not know what effect these drugs have in the long term.

MDPV became especially popular among poorer users, given that it is very cheap: in Hungary, 1 gram typically costs between 2,000 and 3,000 Forints (6-10 euros). This also appealed to teenagers, in particular uneducated youngsters. Given that the new drug was not yet on a list of controlled substances, it was sometimes difficult to identify in a blood test.

Confession of a crystal user

"My first experiment with what replaced mephedrone, with crystal (4- MMC), happened several months ago. I got some quality crystal for 3,000 forints (approx. 10 euros) that I ground into powder. I took it alone, by sniffing, at night: one gram taken bit by bit every half hour. There was no pleasant experience. The acidic effects gave me a nose bleed, a clamping pain in my chest, probably my heart, and panic attacks.

"The second time happened a few days ago. I used it intravenously with a massive MEFI (mephedrone) addict. We injected four grams continuously, fed every two hours. We had a nice and free, mild ecstasy-like high (pressured speech) until the end of the third gram. I knew that for months the guy had been using intravenously only the MEFI. After the last gram he had no money left, but we wanted to have one last shot. From one moment to another (he was sitting on a stool next to me) he fell asleep. When he came round he was staring at me with glazed eyes, totally conscious but completely disturbed. I saw his personality collapse in front of me, but I could feel his anger also, he just exuded aggression.

"He walked towards the kitchen, stopped and asked where he was, what was this place? He asked me who I was. Then he walked out of the apartment. I could hardly communicate with him. His aggression escalated so far that he got mad when I asked if he was okay. He was lingering and hallucinating in my apartment for a while. There was nothing before, but now he staggered like a drunk. Then dropped down on the bed and lost consciousness. This is after just a few months use.

"I woke him up hours later, but even then he was stunned and still staggering. So I saw all of this and this one occasion was enough" – the experience of a user on a Hungarian psychedelic forum.

Is decriminalisation the solution?

The government of New Zealand is experimenting with a new way of dealing with designer drugs: it is planning to legalise them.

The NZ Health Ministry, as has been the case in some European countries, had previously put these drugs on the C-list. But the procedure was found to be too lengthy. At least two months would pass between the appearance of a new drug and its appearance on the list.

If the legalisation goes ahead, the government would also regulate imports of psychoactive substances; there would be no selling to minors, advertising would be restricted and the ingredients and all the side-effects would have to be written carefully on the box, with the substance only available legally in special stores.