Today, among adults, cannabis is the most commonly-used drug in Hungary, particularly among teenagers. Cannabis is usually imported from the Czech Republic and the Balkans, but production within Hungary is on the rise. Alcohol with medicines comes second in the list of the most widespread drugs among those who are under 18, glue-sniffing is in third and the usage of tranquillisers/sedatives is fourth.

Next is mephedrone in fifth and amphetamines sixth. The popularity of ‘alternative’ drugs (such as sniffing glue and alcohol with medicines) stems from the fact that younger people mainly use drugs that are easier to buy legally and which are cheaper than most commonly-used drugs in Western countries. 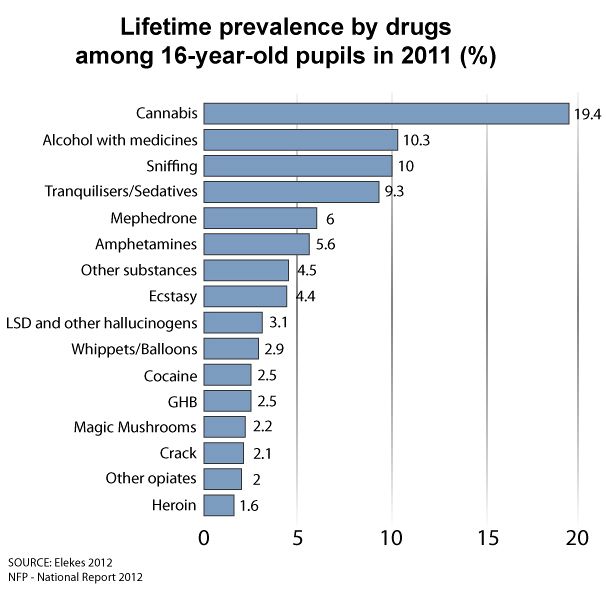 Marijuana is the most commonly-used drug among adults, before ecstasy. Amphetamines are in third place, followed by hallucinogens. Heroin consumption almost disappeared in 2011. 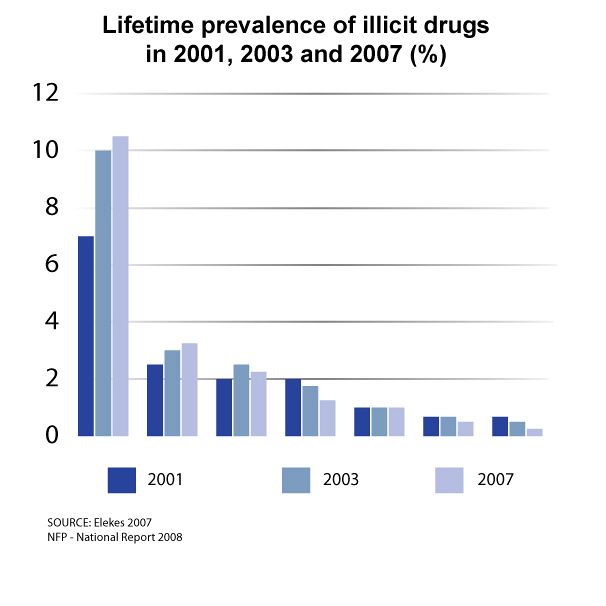 Consumption of drugs is a secret activity, which is why the exact number of drug consumers is difficult to calculate. In Hungary, 9.3 % of people (921,000) aged 18-64 have consumed drugs at least once in their lives.

In the 1980s the most widespread drugs in Hungary were synthetic or natural opiates and barbiturates. It was due – to some extent – to the closed system of the communist regime: people could only get hold of drugs that had been accessible before (and these were mostly medicines). 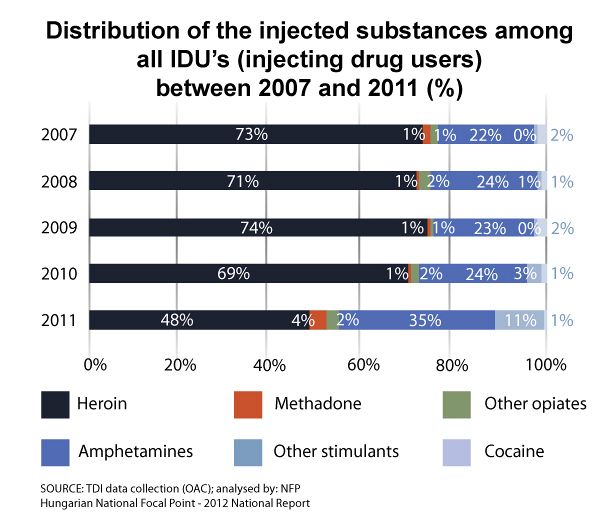 Heroin dependence became a feature of the country’s drug landscape after the fall of the communist regime, from 1989 until the mid-1990s. After that, as amphetamine use grew heroin consumption stagnated in the second half of the 90s.

Cannabis and psychoactive substances became popular at the turn of the 21st century. In recent years Hungary has witnessed the emergence of so-called “designer drugs” which attracted consumers because they are cheaper and more accessible. While intravenous heroine consumption decreased rapidly because of the increasing popularity of designer drugs, the rate of other stimulants used by injection and designers drugs drastically increased.

According to a study from 2010, some 5,699 people were intravenous consumers but, while between 2007 and 2010, around three quarters (73%) of them were mainly injecting heroin, in 2011 this proportion fell to 48% because of heroin became more expensive and harder to find. That coincided with the rise of synthetic or ‘designer’ drugs. 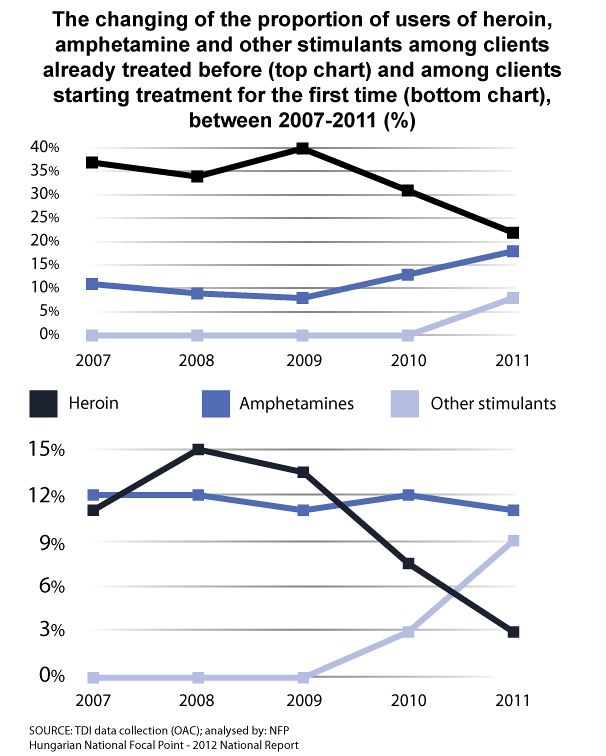 In 2010, the number of men and women who had used heroin at least once in the previous two years was around 3,130. For amphetamines the number was 27,323 people compared to 5,600 for cocaine. Among new users of psychoactive drugs, polydrug consumption (mixing drugs or changing drugs unconsciously) is typical. Also Hungarians don’t just take designer drugs orally – more and more people inject.

According to one recent survey, around one in five (19.9%) 16-year-olds have already used some prohibited substance. Another survey claims the figure for 15 to 17-year-olds is higher and that one in three youngsters in this age range have used illegal substances, mostly cannabis.

The rate is higher if we take a look at the 18-34 age group: 20,9% of this demographic, more than one-in-five, has used drugs at least once. That proportion is larger in the 18-year-old age group: one in two 18-year-old high school students admits to having used drugs.

Hungary has introduced a new anti-drug strategy, with the aim of making the country drug-free by 2020.

But many experts believe this is unrealistic. For example there is no method for combating designer drugs mentioned in the strategy. The plan has little to say concerning designer drugs except that their use is spreading epidemically due to the fact they can easily be purchased. Distribution of designer drugs is also increasingly being taken over by organised crime.

Schools have been the focus of prevention efforts for many years. 60% of prevention and awareness initiatives are directed at students while 40% are directed at teachers or other adults responsible for students. In any given school year there has been some kind of prevention and awareness initiative in 85% of schools. Private-sector groups initiated a programme in 2005 aimed at teenagers in urban areas found hanging out in shopping malls and encouraging them to spend their free time doing more organised activities.

In 2011 (the most recent official data), 4,783 people signed up to a drug treatment programme, with 72% of them doing so as an alternative to punishment following prosecution. In most cases (69%) treatment was for cannabis abuse; the second most common group was amphetamine-type stimulants (16% of cases), and third was opiates (7%).

Hungary has had substitute-drug treatment since 1995, when drug users were given methadone or buprenorfin naloxon to replace illegal drugs. There were 11 such centres in Hungary in 2011. For longer-term treatment there are rehabilitation centres, of which there are 11 nationwide.

The new Penal Code came into effect in July 2013 and the so-called ‘C-list’ of banned substances has already been updated several times. Perhaps the most significant consequence was that penalties became tougher.

While drug consumption per se wasn’t punished between 2003 and 2013, since July it can be punishable by up to two years imprisonment. If there is no other drug related conviction against consumers in the last two years, they can attend a drug addiction course. Satisfactory attendance for one year means the legal proceeding is terminated and the incident won’t appear on a criminal record.

The new penal code takes a step away from promoting therapeutic treatment for drug addicts. Possession of an illegal substance can be punished by up to three years imprisonment if the substance is found on the person of someone inside a public institution or in close proximity to it. For example, if police find just a scrap of marijuana in the pocket of a student in school, that student will be taken to the police station, their home will be searched, and the person prosecuted.

Dealing drugs to a minor also carries strict punishment; if an 18-year-old student passes a spliff to a 17-year-old classmate at a school party, the 18-year-old can be punished with a prison sentence of up to five years. 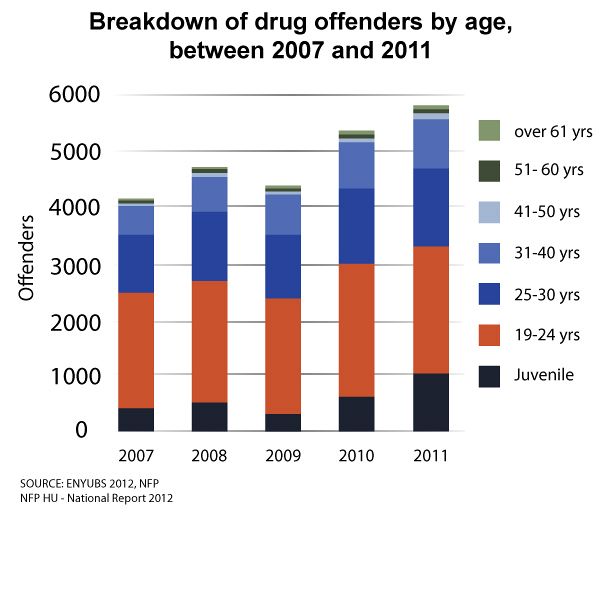