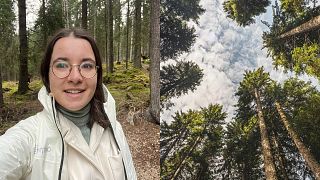 I’m drenched to the bone, lost on a mountain and late for dinner.

Yet I’m calmer than I’ve felt in days - and it’s not the onset of hypothermia addling my mind. Instead, I’m experiencing the meditative effects of forest bathing.

On a recent trip to the beautiful Trentino region of Italy, I tried the trend that’s hooked nature-lovers and medical professionals around the world. Here’s why you should too.

What is forest bathing?

When I first heard about ‘forest bathing’, I presumed it involved swimming. But you can leave your swimsuit at home. To go forest bathing is simply to immerse yourself in nature, soaking up the sights, sounds, touches and smells of the great outdoors.

I’m sceptical of plenty of wellness trends. Too often, adherents are promised inner peace - once they’ve purchased some piece of costly equipment or vitamin subscription.

In contrast, the appeal of forest bathing - a literal translation of the Japanese term ‘shinrin yoku’ - lies in its simplicity. It basically involves going for a slow walk in nature, no branded paraphernalia required. The practise evolved alongside the Japanese art of mindfulness, and emphasises lingering in the present moment.

Numerous studies confirm what you probably intuitively know - spending time in nature is extremely good for you. It can lower blood pressure, cortisol and heart rate, and lessen the impact of anxiety and depression.

In Japan, doctors prescribe shinrin yoku to patients, citing its restorative effects. The UK Woodland Trust charity has urged British GPs to do the same.

Why go forest bathing in Paneveggio?

Situated in the stunning Italian Dolomites, the Paneveggio Pale di San Martino Natural Park is a beautiful spot to try forest bathing. The sprawling nature reserve contains the ‘forest of violins’, so named for the instruments that are carved from its towering red spruce trees.

A light drizzle misted us as we exited the bus, and our guide apologised - but I didn’t really mind the wintry weather. Glistening in the gentle rain, the forest felt strangely ethereal. Neon-green moss carpets much of the ground. An icy blue river swiftly coursed downhill, flanked on either side by colossal trees.

Unfortunately, the shower suddenly intensified, and a planned outdoor meditation session - initially the subject of this article - was cancelled.

Can you go forest bathing without a forest?

With two hours to kill before dinner, I decided to go for a walk. As I set out from Cavalese - a little mountain town at an elevation of 1,000 metres - my Bluetooth headphones died just as I felt a drop of rain.

After contemplating turning back, I resolved to try some unguided forest-bathing.

“The practice can be as simple as walking in any natural environment and consciously connecting with what’s around you,” National Geographic advises.

I set off on an uphill path, with no particular direction. I usually listen to music while I walk, so my mind was a bit restless - but by focusing on breathing the fresh mountain air, I soon adjusted, and moved slowly up the track, trying to stay aware of my surroundings.

“To forest bathe… slow down. Move slowly so you can see and feel more,” recommends Forestry UK.

“Take long breaths deep into the abdomen. Extending the exhalation of air to twice the length of the inhalation sends a message to the body that it can relax.

“Stop, stand or sit, smell what’s around you, what can you smell?”

My path wound through thickets of wood, emerging into paddocks. The horizon was mountainous, shrouded in low cloud. The leaves of the trees rustled in the light breeze. Black fungi clung to their bark, dripping with raindrops, which drummed against my jacket.

Forest bathing is not hiking. You are not measuring distance, or trekking towards a particular destination.

But I really enjoyed this ‘aimless’ wandering - and was surprised by how rejuvenated I felt after an hour and a half.

I didn’t encounter a single other person, but eventually made it back to the town (confession: I did have to consult google maps for the last part).

I probably cut a strange figure - I was drenched to the bone, beaming manically and wielding a stick I’d picked up en route - but I’ll definitely be trying forest bathing again soon. Hopefully I won’t have to get quite so wet.

Other things to do in Trentino

Trentino - an autonomous province in northern Italy - is a nature-lover’s paradise. But if forest bathing doesn’t appeal, there are plenty of other things to do, too.

3. Visit the ‘painted city’ of Trento

Wander the cobbled streets of the region’s capital, soaking up its medieval and renaissance charm.

Largely pedestrianised, the city is filled with important historical buildings like the imposing Buonconsiglio Castle and the Cathedral of Saint Vigilio.

Admire the frescos and murals that anoint the walls of the so-called ‘painted city’, or head to the modern MUSE science museum to learn more about the region’s biodiversity.

Trento is easy to reach from major Italian cities - it is 90 kilometres (56 miles) north of Verona and 59 kilometres (37 miles) south of Bolzano.

2. Check out the thermal springs at Levico

Nearby Levico is home to the famous Levico Thermal spas. Since the 16th century, health-seekers have flocked to these arsenic and ferrous springs, known for their calming effect on the nervous system.

“The thermal water of Levico is particularly suitable for anxiety, musculoskeletal disorders, dermatological and gynaecological complaints and thyroid diseases,” the region’s tourism board promises.

“Studies have confirmed the therapeutic effect of the springs on respiratory diseases and inflammation caused by pollution and smog.”

Levico is also home to several beautiful lakes, perfect for swimming in the summer months. As the weather turns colder, you could saddle up instead, following the 80km bike trail around Lake Valsugana.

1. Sample some of the region’s sparkling wine

Trentino is famous for its Trentodoc sparkling wine, Italy’s first certified traditional-method sparkling wine. It is made from grapes grown at high altitudes in vineyards up to 900 metres above sea level.

You won’t be disappointed - at the 2021 Champagne and Sparkling Wine world championships, Trentodoc won 72 medals.