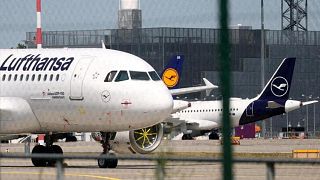 Labour union Verdi had called for the walkout, which is due to run until 6 am on Thursday, over its demand for a 9.5 per cent pay hike for around 20,000 workers and warned that more industrial action could be on the cards.

The strike has caused Lufthansa to cancel nearly all flights at its Frankfurt and Munich hubs for Wednesday, adding to travel disruptions during the busy summer travel season.

Strikes and staff shortages have already forced airlines including Lufthansa to cancel thousands of flights and caused hours-long queues at major airports, frustrating holidaymakers keen to travel after COVID-19 lockdowns.

Lufthansa said on Wednesday it was "a sad day" for holidaymakers who were unable to catch their flights due to the strike, adding that the walkout was unnecessary and out of proportion.

Diego Lambiase, who was on his way from Africa to Paris, found himself stranded in Frankfurt on Wednesday when his onward flight was cancelled.

"They say I will be rebooked tomorrow, but nobody was here when we arrived in order to say what we have to do, where we have to go, where we will sleep," he told Reuters TV at Germany's busiest airport.

"We are looking for some Lufthansa people, but when we asked we were told it will be very hard to find someone from Lufthansa today at the airport. So we don't know what to do," he said.

Why are Lufthansa workers striking?

Verdi last month demanded a 9.5 per cent pay rise, or at least €350 more per month for 12 months, for around 20,000 workers who it says are being squeezed by inflation and have been overworked due to staffing shortages at airports.

Lufthansa had offered an increase of €150 per month for the rest of this year and another €100 from the start of 2023, plus a 2 per cent increase from mid-2023 dependent on the company's financial results.

Verdi rejected the offer, saying it was insufficient to offset soaring inflation, which hit 8.2 per cent in Germany in June.

"I can understand (the strike) because they have the most leverage right now, during the summer holiday period," said Julian Grundmann, who was on his way to Seychelles on a different airline.

"But for everyone who wanted to fly today, who had been looking forward to their holiday for a long time, this is tough," he said.

Verdi and Lufthansa have held two rounds of wage negotiations so far. A third is scheduled for 3 and 4 August.

"Should Lufthansa be stubborn next week and not improve its offer, we will consider further consequences for industrial action. Strikes would not be ruled out," Marvin Reschinsky of Verdi said.