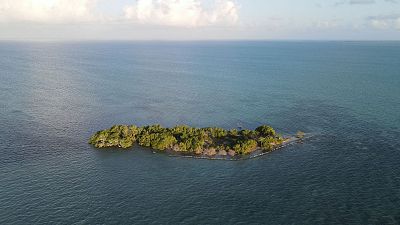 Coffee Caye is a slender island in the Caribbean, half-covered in mangroves, fringed by coconut trees and cooled by an ocean breeze.

It’s exactly what its new owners had in mind, says Marshall Mayer, co-founder of 2018 crowdfunding campaign, Let’s Buy an Island. Mayer and Gareth Johnson did just that, with more than 100 investors (and counting) having paid for a slice of the half hectare plot, each purchasing a stake in the “micronation.”

The core investors list Robinson Crusoe, Lord of the Flies and Playboy among their reading interests on the project website. They described their goal as a tropical paradise, no matter how small.

And the island they ended up buying happens to be 15 minutes off the coast of Belize, a Caribbean country that only got its independence back from the UK in 1981, nearly 500 years after Christopher Columbus first sailed past.

“There’s the mystique behind owning a property that is an island, but in the end, it’s just a property,” New York-based Mayer, 31, tells Euronews Travel. “In the end, it's a pretty boring transaction, but it was really a question of can we do it.”

Mission accomplished, the investors are now deciding how to turn it into the tourist destination of their dreams - and make some return on the $3,250 (almost €3,000) they each put up for a share.

‘Maybe we should create our own country’

“Who wouldn’t want to buy an island?” asks Morgan Bourven, one of the project's earlier investors. Mayer said this too in a widely-read CNN interview last week, which landed more than 800 interested investors in his inbox.

CEO and co-founder of Let’s Buy an Island, Gareth Johnson is a Brit who also runs the company Young Pioneer Tours (YPT). This tour operator takes travellers to ‘extreme’ and unrecognised states like Abkahzia and Nagorno-Karabakh. One tour to North Korea resulted in the imprisonment and death of a 22-year-old US student.

The company’s selling point is “budget travel to countries your mother would rather you stayed away from.” Morgan too has been to North Korea with YPT, Chernobyl and Transnistria among other places.

He says the project to buy an island was born from discussions among tour-goers. It was a natural extension of visiting places with such recently and controversially drawn borders.

“There are always these talks, this debate about: what is a country, what is a nation, what does it mean, going to a place like Transnistria. And at some point, we were like, maybe we should create our own country just to see what it's like and to have a bit of fun in the process,” he tells Euronews Travel.

Nation-building was always part of the bold idea behind the crowdfunding project, registered in the Cayman Islands.

“It’s very tongue-in-cheek,” Bouvren adds, “we don’t intend to declare independence from Belize. But we have our flag and constitution with funny rules.”

Though investors can buy multiple shares, each person is entitled to one vote in the island’s democratic decision-making. The first investors chose Coffee Caye from a shortlist of islands in the Philippines, Malaysia, Ireland, Panama and Belize, though Mayer says “it was one of those things; when you know, you know.”

‘I have an island in the Caribbean’

The tiny island was bought in December 2019 from a Belizean woman and her husband, originally from Lebanon but living in the country for decades. Then Covid struck and it wasn’t until February 2022 that Bourven first stepped foot on his Caribbean paradise.

“We were all stuck at home thinking damn, I have an island in the Caribbean and I've been locked down in Paris. That's unfair,” says the French journalist, who also has a house in Brittany.

Arriving made it real, especially when he was able to send photos back to sceptical friends of him drinking coconut water on his beach.

“The water is fantastic, very warm, very blue,” he recalls. “I realised that this project was not just throwing money at a concept, it was a real island with lots of potential and a place where it feels good to be.”

What’s next for Coffee Caye?

Some of the groups’ thoughts bear the boyish mark of YPT. Ideas reportedly range from raising a statue of Lenin to creating an underwater sculpture park of world dictators.

But Mayer’s more practical focus is on building a bed and breakfast site, including four to six rooms that travellers can stay in, toilet facilities and a bar. They’re now seeking environmental permits to build on the beach and hope to be open for business by the end of the year.

This comes with challenges, however.

“Necessity dictates that we maintain a level of eco-friendliness,” he explains, pointing to the climate-critical mangroves, the reefs, and rich Marine Protected Areas surrounding the caye.

“We’re in an isolated place, and if we were putting too much trash out, it would literally be piling up in our own backyard, so that becomes something of an issue.”

With a background working for non-profits - including a stint in the Philippines helping to build artificial reefs for fish - Mayer says he is keen to work with local organisations. He wants “to help keep Belize as beautiful as it is, and maybe even reverse some of the effects of climate and environmental change happening there.”

To protect Coffee Caye from the encroaching Caribbean Sea, for example, the investors have voted to erect a sea wall to prevent erosion.

“Sea level rise is a concern, but more on a global scale,” says Bourven. “The truth is that I think that when the island is submerged by the sea level rise, at one metre or even 50 centimetres, we will have much bigger problems worldwide than our island.”

Will the island still be open to people from Belize?

The original investors, who hail from the US, UK, Canada and France, do not want to build a fortress, however. Though no Belizeans own a share in the island, Mayer says all are welcome to visit.

“One of the reasons that [Oscar D. Romero, the Belizean real estate agent who found them the island] wanted to work with us, is because he felt we weren’t colonising the country,” says Bourven. “It’s not going to be a private property.”

In February, his party of investors and intrigued tourists found traces of fire left by local fishermen. “And that’s no problem because it’s their country. They were there before so we don’t intend to cut them off from using the island.”

The investors say they are keen to employ local people for events, weddings and music nights. And, in another boost for the local economy, run tours across the country.

“We are not just going on the island for one weekend, because it would be nonsense,” says Bourven. “We also go around the country, spending more than one week going to see Mayan ruins, snorkelling, visiting different villages.

“Just to understand what Belize is, what the history of this country is. That’s also part of the project.”

Seize the moment: How adventure travel is taking hold in 2023