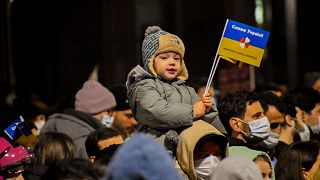 On Sunday evening, for the fourth day in a row, Tbilisi’s Rustaveli Avenue flooded with demonstrations of solidarity for Ukraine that poured out from the Parliament steps.

Across the sea of some 30,000 people, blankets of sky blue and wheat yellow danced alongside white sheets branded with ruby crosses, a symbol of two countries united.

Between the thundering of Ukraine’s national anthem - whose lyrics proclaim “Ukraine is not yet dead” and that her “enemies will vanish like dew in the morning sun”– I watch the crowd belt out in unison Slava Ukraini! and Putin khuylo! These are two patriotic sayings synonymous with Ukrainian freedom, the former of which means Glory to Ukraine, and the latter, a vulgar and apt sobriquet for Vladimir Putin.

Tbilisi is one of many cities across the globe standing up for Ukraine as Russia launches air raids on the capital of Kyiv. People have come out in record numbers in cities like Berlin, which had 100,000 people take to its streets yesterday and Prague’s nearly 70,000 strong gathering at Wenceslas Square.

For Georgia though, the knife of Russian aggression digs deep.

“My family remembers watching the Tskhinvali skyline from their balcony and seeing what could’ve been confused for a night of fireworks and celebrations. But they were bombs,” says Nina Vaxanski, a Georgian photojournalist raised in Gori, the epicenter of the 2008 Russo-Georgian war.

According to an EU fact finding report, the war left 170 servicemen, 14 policemen and 228 civilians dead on the Georgian side. Tskhinvali, the capital of Georgia’s north central region of Samachablo has been under Russian occupation since.

“Over the years, Russia has tried again and again to take Georgia. I worry now that if they continue this way in Ukraine, if we don’t stand up against this horrible power, they will come back to Georgia and try to ruin all that we’ve worked for.”

Over the years, Russia has tried again and again to take Georgia.

She continues by saying, “If Ukraine is strong, we can be too, this needs to be a wake up call for the world. We are in this war together with Ukraine and we stand strong with them. Just because the bombs don’t drop on us now, doesn’t mean that they won’t.”

This shared struggle is one of the many reasons Georgians and Ukrainians have a strong camaraderie with one another and why, to many, this attack on Ukraine feels like an attack on Georgia.

Over the past few days, 300 odd Georgians have left for Ukraine where they will fight side by side with Ukrainians against a common enemy.

This needs to be a wake up call for the world. We are in this war together with Ukraine and we stand strong with them.

A heroic act that brings on mixed feelings of perseverance and angst further punctuated by the lack of sanctions and any real condemnation of the Kremlin by Georgian PM Irakli Garibashvili.

Children are screaming for Ukrainian freedom

I’ve watched in awe, slack-jawed really, as people, a surprising number of whom looked to be 20 or younger, took to the same street used to protest anti-Russian aggression so many times before.

Children no more than 5, sat on dad’s shoulders, screaming for Ukrainian freedom, and groups of teens proudly waving the Georgian and Ukrainian flags, laughing with their friends, cigarettes dangling from their lips.

Off in the distance a man can be seen holding a small book before lighting it on fire and belting an emotional speech to those gathered around him. The scarlet coloured book, embroidered with a two-headed gold eagle, isn’t really a book at all, it’s his Russian passport.

Further into the crowd, a girl shoots up on someone’s shoulders and screams out “Slava Ukraini!” Before popping the top on a yellow smoke bomb. Deeper into the crowd, on the jam-packed steps of Parliament are two girls, Hanga Modzmanashvili and Oliko Chelidze, who at just 12 years old find their time best spent fighting for democracy.

To these inseparable friends it’s simple, “standing up for Ukraine is the right thing to do.”

The Russian Empire, then the Soviet Union, and now the Russian Federation, seem to love toying with power. And as the rest of the world waits with bated breath for what’s next, so too does Georgia, chanting in unison that Ukraine is not yet dead and that one day, their enemy will vanish like dew in the morning sun.