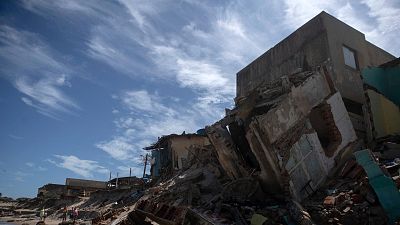 The Brazilian town of Atafona was once a popular destination for holidaymakers from the neighbouring city of Campos dos Goytacazes.

Tourists came in their droves as an influx of holiday homes, hotels and recreational facilities were established along the resort’s sandy shorelines, promising weekends away and endless sunny days on the Atlantic coast.

But now it is becoming a ghost town, as the relentless rise in sea levels turns the former tourist hotspot into an apocalyptic nightmare.

"It would be awful to lose this house, because it holds so many memories of my whole family," says João Waked Peixoto, a resident whose home is soon to be lost to the sea.

Walking through the rubble of what was once his neighbour’s house, he looks at what is left: the shadow of a room strewn with tattered magazines, a rusted bicycle and other remnants of life.

Peixoto's grandfather built his house as a vacation home, but it now looks inevitable that it will be swallowed by the sea.

"When will we have to leave? That's unknown," he says.

"The sea has advanced three or four metres in 15 days. Our wall might not last until next week."

As early as the 1960s, signs of coastal erosion were evident in Atafona.

The resort is positioned beside a major estuary - a convergence between river and sea where mounting tidal pressure can lead to increased land degradation.

This is coupled with the dramatic effects of climate change, which have seen a 20-centimetre rise in global sea levels since the start of the 20th century.

In Atafona alone, the Atlantic Ocean advances an average of six metres a year - causing ruin and devastation for the locals who own properties along the resort’s shoreline.

A total of 14 blocks and 500 houses have now been lost to the sea, turning the once idyllic coastline into an underwater graveyard.

A total of 14 blocks and 500 houses have now been lost to the sea, turning the once idyllic coastline into an underwater graveyard.

"It cannot stay the way it is,” says Verónica Vieira, President of the SOS Atafona association, a neighbourhood project aimed at raising awareness of the issues facing the coastal community.

“It is an abandoned city, an apocalypse. It just makes me want to cry."

‘The river is dead’

Atafona belongs to the four per cent of global coastlines that lose over five metres of land to the sea every year.

But rising ocean levels are not the only problem facing the former holiday destination.

“Atafona has had a chronic problem for decades,” says geologist Eduardo Bulhoes of Fluminense Federal University.

The nearby Paraiba do Sul river, whose mouth is in Atafona, has shrunk because of excessive mining and agriculture in the region.

"In the last 40 years, that has drastically reduced the river's volume, meaning it transports less sand to Atafona," says Bulhoes.

With less sand, the town's beaches have stopped regenerating naturally, ceding more and more ground to the sea.

And construction along the coastline has only made the problem worse,stripping away sand dunes and vegetation - the beaches' natural defence against encroaching sea levels.

The result has been disastrous for the tourism and fishing industries.

"Large boats can't come through the river delta anymore, and the money disappeared along with them," says Elialdo Bastos Meirelles, the head of a local fishermen's community of some 600 people.

"The river is dead."

A matter of survival

Local authorities have studied several plans to curb erosion along Atafona’s coastline, including building dikes to reduce the force of the ocean's waves and hauling sand from the river delta to the beach.

"A breakwater construction or a type of seawall can transfer this problem to another location,” says Alex Ramos, Deputy secretary of the Environment of São João da Barra.

“So far, no decision has been made about what would be the most viable for our region."

While some in the area remain hopeful that the problems facing Atafona can be reversed, for many locals, the heyday of the former beach resort is little more than a distant memory.

For now, the issue is one of survival.

“I'm already arranging to rent another house to get my family out of here,” says João Waked Peixoto, who has already accepted the fate of his former home.

“I just can't put them at risk anymore.”

Watch the video above to find out more about the Brazilian beach resort.