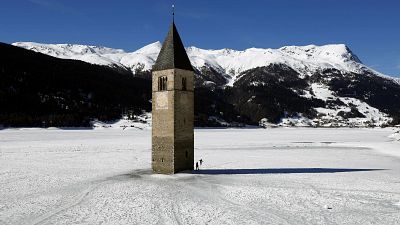 Graun in South Tyrol in Northern Italy, is one of hundreds of drowned European towns   -   Copyright  Matthias Schrader/Copyright 2019 The Associated Press. All rights reserved.
By Sarah Palmer  •  Updated: 10/03/2021

Most people focus on the monuments and museums the eye can see when planning a trip in Europe. But you’ll be missing out if you don’t consider the cities, towns and villages that exist underwater.

Read on for the amazing history behind the bustling cities that became underwater worlds - and which parts of them are visible to this day.

What are the origins of European cities?

200,000 years is mostly agreed upon as being the start of humans walking the Earth, following 540 million years of evolution after a bag-like creature with a huge mouth crawled out of the sea. As fully-formed people we, of course, needed to survive - and that meant some changes to where we lived.

The evolution of what we now know as cities really began with caves, then structures made from mud, straw and sand, right through to the architecture which has made Europe home to some of the most beautiful structures in the world.

That’s the (very brief) history of how we came to be the tenants, homeowners and architects of the cities we live in. But there’s a submerged chapter in Europe’s infrastructure antiquity. That is, the towns, villages - even cities - that exist beneath the blue; and how they got there.

Why is Europe home to so many flooded towns?

The main reason Europe houses so many underwater towns is actually, in a tale as old as time, to do with survival.

Building optimal communities is an ongoing process. Where it seemed like a good spot for a town five centuries ago might now hinder the modern progression of contemporary towns and cities. Local governments and authorities are always adapting to better suit the needs of surrounding areas.

The bigger a population, the more resources are required. This can be at the cost of ancient heritage - when buildings are demolished to make way for new ones, or areas are flooded to improve water supply to larger towns and cities - and in more recent years, to provide hydroelectric power.

Water supply, especially on the continent which is essentially a large, concentrated land mass, is a key priority.

In the 1960s, the Catalonian government transformed Sant Romà de Sau - built and inhabited 1,000 years prior - into a water mass. Situated among the hills of southern Spain, somewhere between Barcelona and Girona, Sant Romà de Sau was the victim of a dam being built across the River Ter to create a reservoir.

Its 100 residents were rehomed - even taking their dead from the ground - and since 1965, the Sau Reservoir has provided the majority of the drinking water supply for the Catalonia region. In a defiant reminder of what once was, the reservoir is characterised by the spire of the church, which is still visible when the water is low.

History repeats itself across the continent and beyond. In the UK’s high Pennines, Watergrove Reservoir in Rochdale is one of Manchester’s favourite walking spots. But it was only developed in the 1930s following a prolonged drought in the area. Once a Victorian farming village, harvesting food and even quarrying stone from the surrounding hills, ramblers can still see the buildings beneath the water on a clear day.

Worth mentioning here that Watergrove was already named Watergrove pre-flooding, which seems prophetic.

There are also environmental reasons for cities and towns being buried under water - especially on the coastlines and volcanic fields.

Pavlopetri is one of the oldest lost cities to be found in the Mediterranean Sea, at about 5,000 years old. It’s unique because it remains more or less completely intact, even today. Roads, buildings and tombs still stand off the coast of southern Laconia. Now, it’s part of UNESCO’s underwater heritage site map.

Pavlopetri was rediscovered in 1967. Its location between the islet of Pavlopetri and the Pounta coast of Laconia made it the target of three earthquakes around 1000BC.

Phanagoria, which was once the largest Ancient Greek city, is about a third underwater now. A landscape of crevices, hills and volcanoes made it an ideal settlement - shielding from the weather, and especially because of its proximity to the sea.

Another victim of the sea, Italy’s Ancient Roman town of Baia (the ‘Las Vegas’ of the empire) is on the northwest shore of the Gulf of Naples. It was once the party city of the ultra-wealthy, where the rich and powerful flocked to pursue sordid affairs.

Now, 100 metres of water covers the town - already abandoned because of a malaria outbreak in 1500 - as a result of volcanic activity.

Port Royal in Jamaica, once dubbed ‘the wickedest city in the world’ is perhaps one of the more famous sunken locations. Known for pirates, rum and sex, the devastating earthquake in 1692 resulted in ruins.

Shicheng, China’s ‘Atlantis of the East’, was flooded in 1959 to make way for the Xin’an Dam and its adjoining hydroelectric station. 300,000 people were forced to leave the ‘Lion City’ (it’s literal translation). Now, the water preserves a tribute to Imperial China, which can be seen in the architecture and design of the city.

Can people visit the sites?

There are many travel companies who offer diving opportunities in normal circumstances. Shicheng is a popular one because its lake status means novice divers with a keen interest in China’s imperial history aren’t battling the challenges that come with ocean diving. Scuba diving Jamaica’s Port Royal is also a bucket-list favourite.

Lots of land-based tour guides can also enlighten visitors as to the history behind these fascinating sites around the world. Many of the dams and reservoirs aren’t accessible via the water as they are operational facilities, but these are best seen from the higher ground anyway.

Please note that there are currently travel restrictions in place due to COVID-19. Depending on which country you visit, restaurants, bars and museums may be closed. Always check government advice before making any bookings.

Trentino: Why you should try ‘forest bathing’ in this green paradise