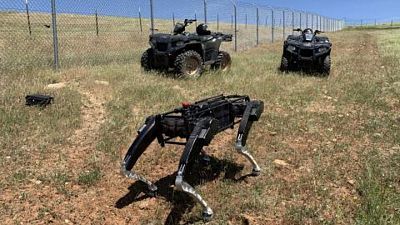 Robot dogs are being tested out along the US border with Mexico with a view to using them regularly to patrol the border area.   -   Copyright  Ghost Robotics
By Ian Smith  •  Updated: 09/02/2022

The US is testing robot dogs to patrol its border with Mexico in a bid to increase the Customs and Border Protection (CBP) presence along its southern frontier.

The move has raised alarm bells among civil rights groups and some US politicians.

“It’s shameful how both parties fight tooth + nail to defend their ability to pump endless public money into militarisation,” said US Democratic congresswoman Alexandria Ocasio-Cortez in response to the news on Twitter.

“From tanks in police depts to corrupt military contracts, funding this violence is bipartisan + non-controversial, yet healthcare + housing isn’t”.

It’s shameful how both parties fight tooth + nail to defend their ability to pump endless public money into militarization.

What do the robots do?

The robot dogs are manufactured by Ghost Robotics, a security tech company that works with the military.

They have previously courted controversy when Ghost Robotics teamed up with Sword International, a small arms specialist and added an unmanned rifle to the bot with a 30x optical zoom, thermal camera for targeting in the dark, and an effective range of 1,200 m.

The robots being deployed along the border are unarmed.

A blog post by the US Department of Homeland Security (DHS) said they would be “a helping hand (or ‘paw’)” to CBP personnel.

“The southern border can be an inhospitable place for man and beast, and that is exactly why a machine may excel there,” Brenda Long, programme manager of the Science and Technology Directorate at DHS, said.

According to Gavin Kenneally, the chief product officer at Ghost Robotics, the robots can traverse “all types of natural terrain including sand, rocks, and hills, as well as human-built environments, like stairs”.

The plan is for the machines to patrol the border, videoing and scanning around them as they go. This has led to privacy concerns about the surveillance of those who live near the border without consent.

The Electronic Frontier Foundation voiced unease at the development and warned of mission creep - when technologies are given to law enforcement only for specific or extreme cases, but then are used outside of those boundaries.

The Honolulu police department invested in robot dogs made by Boston Dynamics last year and drew criticism when police used them to scan the eyes of homeless people. And in New York the police stopped using the same robot dogs following a public outcry.

Giving more power and technology to the DHS has also caused disquiet in certain quarters. In recent years, the department has come under scrutiny for its treatment of asylum seekers at the border.

THIS IS TERRIFYING and sickening https://t.co/9gA7PipLoB

Human Rights Watch uncovered 160 internal reports of misconduct and abuse, including physical and sexual abuse, of asylum applicants at the hands of officers within several DHS components, particularly CBP officers and Border Patrol agents between 2016 and 2021.

“DHS’s plan to use robot patrol dogs on its borders is a civil liberties disaster in the making,” the American Civil Liberties Union (ACLU) said on Twitter.

“The government must retract this dangerous proposal, and the Biden administration must put the brakes on our country’s slide into an anti-immigrant dystopia”.

It has not yet been announced if the robot dogs will become a permanent fixture along the border, nor has the cost of the project been disclosed. However, the DHS dubbed the trial “successful''.

“Don’t be surprised if in the future we see robot ‘Fido’ out in the field, walking side-by-side with CBP personnel,” it said in its blog post.