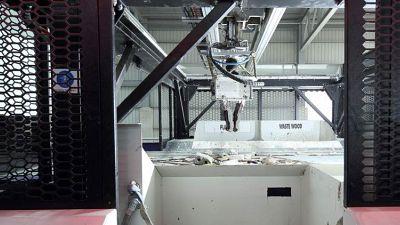 On the outskirts of Finnish capital Helsinki, new technology is making recycling easier.

A recently-opened, 35-million-euro plant, owned by Finnish firm Remeo, can process up to 120,000 tonnes of construction waste, including wood, plastics, and metals.

It is said to be the most advanced recycling plant in Europe.

"We have thousands of thousands of customers, all industries," said Johan Mild, CEO of Remeo, which operates eight plants across Finland.

"From shopping malls, from production sites, from all over our customers, with our lorry it comes here."

According to the European Union, the average European produces about five tonnes of waste a year, but only 38 per cent of that gets recycled. Over 36 per cent of all EU waste comes from construction.

Recycling waste is complicated due to the limited information on materials' content and quality.

In several European countries, including Finland, some waste that can’t be recycled is sent to incineration plants, which produce power and heat, but also add to greenhouse gas emissions.

These arms, they never get tired and also they never get bored, and that makes them quite superior for a job like this. And frankly, given the amount of hazardous objects on the belt, it's really not a good place for people to put their hands on these kinds of sharp edges and other dangerous materials.

"The whole industry basically has had the challenge that a lot of the waste goes for incineration," said Mild. "So, it's burnt up and that's not good for the nature and for the whole planet. So basically, what we now do is we try to raise the level of recycling."

This is where these quick-thinking AI-powered robots come in.

"The key thing for these robots is that they actually identify the waste objects on the belt," said Harri Holopainen, chief technology officer of Helsinki-based ZenRobotics, a company which has robots across 35 sites in around 20 countries.

"They look at each and every object that comes on the belt and then figure out whether it's wood, whether it's wood that has some nails in it, tiles or concrete, and then they put it in the correct chute for later processing."

A unit scans the waste with cameras, a 3D sensor system and a metal detector.

Its AI-powered brain then recognises and identifies the objects and determines the best gripping point.

Its machine vision has been trained on thousands of images of waste, meaning it can recognise over 350 "fractions", a term used to describe the various different types of waste.

The robot's dexterous arm - which can lift up to 30 kilos - then picks and drops the waste down specified chutes. It has billions of potential picking motions. Almost every pick planned by its software is unique.

"And frankly, given the amount of hazardous objects on the belt, it's really not a good place for people to put their hands on these kinds of sharp edges and other dangerous materials."

Industries are coming under increasing pressure to raise recycle rates. In Europe, an strategy set to be adopted in early 2022, aims to boost textile recycling.

Meanwhile, China, which had long been the world's largest destination for paper, plastic, and other recyclables, phased in import restrictions in 2018.

Remeo's Mild says the new technology has allowed them to raise recycling rates from around 50 to up to 90 per cent, in some cases.

"But now, the robots doing it or the machines doing it, we can (get) much more higher than even 70 per cent."

In the battle against global waste, these robots are lending a helping hand.