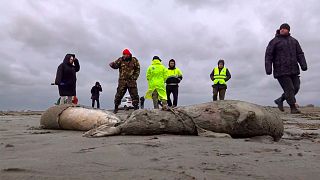 Journalists and Interdistrict Environmental Prosecutor's Office employees walk near the bodies of dead seals on shore of the Caspian Sea, Dagestan.   -   Copyright  RU-RTR Russian Television via AP
By Charlotte Elton  with AP  •  Updated: 05/12/2022

About 2,500 seals have been found dead on the Caspian Sea coast in southern Russia.

The mass die-off was likely due to ‘natural causes’ rather than fishing or hunting, officials have said.

Authorities in the Russian province of Dagestan have collected samples from the seals to establish cause of death.

Caspian seals - the only mammals found in the Caspian sea - are classified as endangered on the International Union for Conservation of Nature (IUCN) red list.

In 1900, there were more than a million of the seals - but after a century of overfishing and habitat degradation, there are just 70,000 left, according to the Caspian Environmental Protection Centre.

Regional officials initially reported Saturday that 700 dead seals were found on the coast, but the Dagestan division of the Russian Ministry of Natural Resources and Environment later raised the figure to about 2,500.

Zaur Gapizov, head of the Caspian Environmental Protection Center, said in a statement that the seals likely died a couple of weeks ago. He added that there was no sign that they were killed or caught in fishing nets.

Experts of the Federal Fisheries Agency and prosecutors inspected the coastline and collected data for laboratory research, which didn't immediately spot any pollutants.

Several previous incidents of mass seal deaths were attributed to natural causes. Kazakhstan, which has a long Caspian coastline, reported at least three such incidents this year.