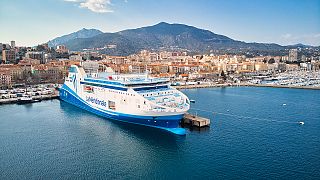 Your next trip to Corsica could be kinder on the environment thanks to a new ‘zero particle’ ferry connecting Marseille and Ajaccio.

In an industry first, the ferry’s fine-particle filtration system can capture 99 per cent of sulphur oxides and 99.9 per cent of fine and ultrafine particles - the main air pollutants emitted by ships.

How does France’s zero-particle ferry help the environment?

French shipowner La Méridionale has been testing the pollution-busting devices for its new ferry, ‘Piana’, for three years. The filters are now capable of removing almost all fine and ultrafine particles emitted by the ferry.

Experts believe the innovation could be a game-changer for the shipping industry. “We can see that a small company is able to implement sophisticated technologies, with immediate benefits for very large players.” says Damien Piga, innovation director of the French air quality monitoring organisation AtmoSud.

Until now, to reduce the level of sulphur oxide in fuel, it was necessary to use either a less polluting fuel or a ‘scrubber’ which washes the fumes with sea water, he explains. Scrubbers, which are placed in the chimneys of ships, are contested because they usually discharge the pollutants into the sea.

The ferry’s filter is inspired by existing technology

The ferry’s filter system is inspired by existing technology used in industrial and household waste incineration, and biomass power plants.

“The baghouse filter has existed for almost 30 years now,” says Christophe Seguinot, technical director of La Méridionale. It works by neutralising the polluting particles with sodium bicarbonate as they are emitted in the exhaust gases, then capturing them in filter bags.

“The challenge for us was to make it suitable for the maritime sector,” explains Seguinot. This involved making the device smaller and lighter, so it could be installed on board a ferry while leaving enough space for travellers.

The company now aims to work towards truly ‘zero emission’ ferries by reducing its nitrogen oxide emissions, which constitute a significant part of air pollution. It is hoped the technology could be applied to cruise liners in future.

Shipping pollution is a major problem in Marseille

Shipping accounts for roughly 10 per cent of air pollution in Marseille. Earlier this month, more than 50,000 people signed a petition to ban polluting cruise ships from Marseille - one of Europe’s busiest cruise ports.

Not only do toxic concentrations of sulphur dioxide, nitrogen oxide and particulate matter damage marine life, they have insidious consequences for human health.

Overall, air pollution causes 9 million deaths each year worldwide. Its annual economic impact on France is around €100 billion, mainly in healthcare expenditure, according to AtmoSud.

Are floating farms the solution to floods and rising sea levels?