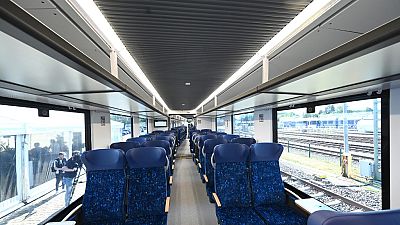 The move has been welcomed by many as a significant step towards decarbonising Europe’s transit systems. Some have said that the fleet is expected to save 4,400 tonnes of CO2 every year compared to standard trains.

"We are very proud to be able to bring this technology to commercial exploitation, as part of a world first," says Henri Poupart-Lafarge, CEO of Alstom, the French group that supplied the trains.

Looking closer, Euronews discovered that the fleet uses grey hydrogen, which is not necessarily good news for the planet.

Are hydrogen trains really the answer?

Currently, 1 in 2 regional EU trains are operated by diesel, releasing enormous amounts of carbon into the atmosphere. In 2019 alone, EU trains were responsible for emitting 3.9 million metric tons of carbon dioxide.

The EU has been in the process of increasing its hydrogen use for several years now, aiming to drastically up hydrogen supplies by 2030. Around 15-20% of the EU’s regional market could be hydrogen operated, says railway expert Alexandre Charpentier to AFP.

However, skepticism about hydrogen is widespread in the energy industry.

Why is hydrogen a controversial renewable?

Whether or not hydrogen is more environmentally sustainable than other solutions, including diesel, depends on a myriad of factors.

Firstly, only some kinds of hydrogen use are green. Most hydrogen is manufactured but it is also possible to extract it from the earth like other fuel sources. Green hydrogen is made from energy produced by renewables, like wind and solar energy.

But the vast majority of hydrogen used today is grey. Grey hydrogen, which is significantly cheaper than green, comes from fossil fuel emissions and can be produced from burning coal, gas, and other fuels. Often, the true carbon cost of hydrogen infrastructure is hidden in the manufacturing process.

Germany’s new rail line is made from grey hydrogen. While the new trains don’t release CO2 in transit, they remain heavily carbon intensive.

Alstom, the fleet supplier, told Euronews that plans are in place to make the German fleet green in the long term, but is this enough?

Even if the rail ran on 100% green hydrogen, it likely wouldn’t be welcomed by everyone in the clean energy community.

Many industries are not suitable for efficient hydrogen conversion. Some specialists, including leading clean energy advocate Michael Liebreich have argued that many transport systems like metros, rural trains, and regional trucks should not transition to hydrogen and some of these should focus more on electrification.

However, from a political perspective, hydrogen transitions like this could be a life ring for Germany.

Since the onset of Russia’s war on Ukraine, Germany has been scrambling to prevent a full-blown energy crisis. Approximately 20% of Germany’s trains are powered by diesel, which Germany gets in large part from Russian crude oil exports.

Because hydrogen can be manufactured in the EU or imported from other partners, it could be a way for Germany to untangle itself from Russian gas. This is already starting to happen. On Tuesday, German Chancellor Scholz announced a major “hydrogen alliance” deal with Canada to expedite the rate of imports by 2025.

A German transition to green hydrogen would be a major turning point in the country’s environmental record, but neither country has commented on whether the trade would be green.

More information is needed about the environmental implications of these kinds of hydrogen transitions. Are they paving the way for green hydrogen in the future or delaying better models like electrification?

As one Canadian government source said “[Germany] is quite keen for gas from just about anywhere".