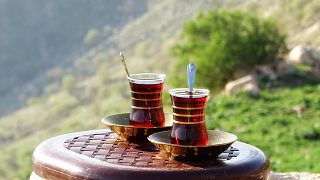 In the Kurdistan region of Iraq, and across the Muslim world, Eid is a time for celebration for children - for visiting neighbours, relatives, and enjoying time with the community. But in recent years, with Eid-al-Adha falling deeper in the summer, weather conditions have caused traditions to rapidly change.

Euronews spoke to Diyan (24) and her niece and nephew, Aska (11) and Lawi (9), about how their childhood experiences of Eid have differed in Duhok.

Diyan said that when she was young, Eid-al-Adha was a time of huge excitement. She used to wake up as early as 5 am, with her new outfit and bag for collecting sweets prepared the night before. Later in the day, she, her siblings, and other young children aged from around 6-to-12 would go and see their neighbours. Customarily, front doors would be left wide open for the day to greet visitors.

“You'd shout in and say ‘Happy Eid’ and they would give you candy and sometimes money. Then, around noon, you would go over to your relatives and, if you were not tired, you would do another round among other blocks. If you had a second outfit for the second day you could go do it again!”

Some 15 years later, Eid customs look different in Duhok. Now, the average temperature in July, when Eid al-Adha fell this year, is 41°C. Temperatures frequently rise even more, often as high as 46 this summer. For many people, it is simply too hot to continue old traditions.

Aska and Lawi continue with Eid customs but have to adapt to the new environment. While they still visit grandparents and receive gifts of sweets and money, they “only go to neighbours when it’s really early, and you only go to the ones that are really close to your house,” says Aska.

Diyan has noticed a big shift over the years. Now, “we set up a big bowl of candy and at the end of the day, the bowl would still be full. 10 years ago we would have to refill.”

Diyan emphasised that increasing temperatures aren’t the only reason that traditions are fading. Now, people tend to trust their communities less than before, with parents more restrictive about letting their children visit neighbours.

However, the weather is playing a significant role. “Back in the day, even if it rained heavily we would still go,” Aska and Lawi agree, adding they would much prefer to visit neighbours in the rain.

“To be honest, it’s very hot. I don’t go around during Eid,” says Lawi.

Beyond Eid: Climate change and culture in Iraq

Iraq is home to some of the most ancient cultural artefacts on the planet. Six of its most renowned sites have made it to the UNESCO heritage list, and this is the tip of the iceberg. The country is brimming with historical sites, customs and relics found nowhere else on the planet. In the Ninewa governorate, archaeologists recently discovered the earliest recorded instance of agriculture - the birthplace of civilisation.

These sites, dating back thousands of years, have outlived the rise and fall of empires, colonisation, independence, authoritarianism, revolution, and the millions upon millions of people who have inhabited them over the millennia.

Iraq is the fifth most vulnerable country to climate change globally, leaving its history and culture at risk of extinction.

Earlier this year, dust storms and water shortages damaged ancient sites in Babylon. These phenomena are on the rise in Iraq.

Desertification riles the violent sand storms that damage cultural sites and infrastructure in general. Currently, 39 per cent of Iraq is suffering from desertification, with reports on the future risk ranging anywhere from 50 to 90 per cent of the country. As conditions worsen, heritage sites will face further erosion.

Artefacts can be repaired, but customs may be lost forever

As bad as the situation is, brick and mortar artefacts can usually be repaired. Projects to restore cultural heritage sites are underway in Iraq, particularly after the ISIS war damaged so many treasured sites.

Customs, on the other hand, are more challenging to revive. Traditions that have been passed through generations tend to be more precarious, with less documentation of specific customs and their importance to the community.

A variety of conditions, including an emphasis on oral culture over written, inhibit research on traditions in the region. This makes it difficult to know precisely the extent to which customs have changed over the years, and whether they will adapt to new climate realities, or disappear.

With fewer children playing outside during peak hours in the summer than before, it is possible that many traditions in KRI and across the globe will fade away entirely - with them, opportunities for generations to convene and celebrate.

Supporters of Muqtada al-Sadr are asked to leave the Iraqi parliament.