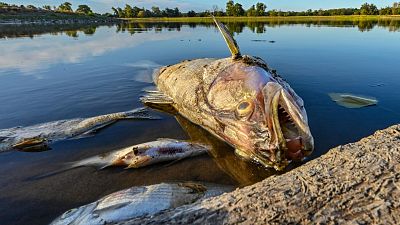 A rare glut of ‘golden algae’ is the most likely culprit behind mass fish deaths in the River Oder, tests have found.

Authorities on both sides of the river in Poland and Germany have been mystified by the ecological catastrophe which has caused tonnes of fish, birds and molluscs to die since late July.

But researchers at Germany’s Liebniz Institute of Freshwater Ecological and Inland Fisheries (IGB) now believe they have got to the bottom of the crisis, after finding ‘Prymnesium parvum’ in all recent samples from the Oder.

"When this specific type of algae is present in very large quantities, as is the case in the Oder samples, very high toxin concentrations must also be assumed," says Elisabeth Varga from the University of Vienna, who led the analysis of the IGB samples.

Research is still needed on the toxicity of the algae, and it is not yet clear whether humans and other animals could also be affected, the IGB said in a statement on Friday.

What is golden algae and what causes it to spread in rivers?

Golden algae (Prymnesium parvum) is made up of rare and invasive microorganisms that usually bloom in brackish waters where rivers meet the sea.

Dead fish were first spotted in the river near Oława town, around 400km from the Baltic Sea on 26 July. But the algal species can spread farther inland when there are high levels of salinity in the water.

Polish climate minister Anna Moskwa said that more research is needed to determine the conditions that led to the algae's appearance. "We see that it rarely appears in the world," she says.

Such a large growth of algae requires elevated salinity levels that could be reached only through industrial pollution.

Such a large growth of algae requires elevated salinity levels that could be reached only through industrial pollution, says IGB scientist Tobias Goldhammer.

Polish politician Piotr Borys points to one company in particular, copper smelting giant KGHM, which reportedly released huge amounts of salt water from its Głógów refinery between 29 July and 10 August.

The MP from Lubin claims that Polish Waters, the government body responsible for inland surface waters, failed to call for the discharges to be suspended, despite the unfolding crisis.

Climate change could have also played a role. Like many great rivers across Europe, the Oder has been shrunk by the climate-driven drought in recent weeks, contributing to high concentrations of pollutants and salinity.

If nothing was done to decrease salt levels, such toxic overgrowths could occur again during a hot, dry summer, Goldhammer adds.

Poland and Germany aren’t the only countries to feel the impact of harmful algal blooms - including red and golden algae - which are emboldened by climate change.

A report from the United States Environmental Protection Agency in 2013 warned that increased salinity during drought conditions was enabling marine algae to invade freshwater ecosystems.

Southwestern and south central US lakes have seen a proliferation of Prymnesium parvum since 2000, causing “significant fish kills in inland waters.”

Last week Polish firefighters removed more than 100 tonnes of dead fish from the river, with locals also responding to a crisis the government has been accused of being slow to act on.

How is climate change impacting culture in Iraqi Kurdistan?