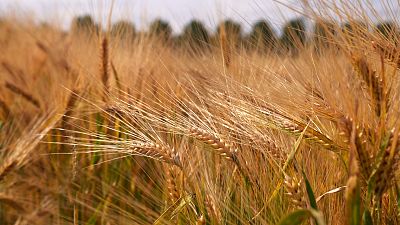 Will it be possible to feed the planet in a warmer world?

The production of key crops like cereals can be hit hard by heatwaves and droughts. In this edition of Climate Now, we are asking if scientists can uncover the secrets of the most resistant plants to 'climate-proof' our food.

We indeed can learn a lot from nature by looking into different environments and see how plants in their natural environment cope with the stresses they get.

June 2022 was the third warmest on record

Before that, let's take a look at the latest data from the Copernicus Climate Change Service.

The latest data shows that globally we have just experienced the third warmest June on record, with temperatures 0.3 degrees above the 1991-2020 average.

If you just look at this Sentinel satellite image from June 2020 above compared to the one below of the same region in 2022, you can see the difference.

And then on this graph of soil moisture anomaly, you can see how the soil is drier than average across much of Italy, and across a whole band from Portugal all the way across Europe to the Caspian Sea.

Can we find strains of cereal crops that can resist the effects of climate change?

As the population of our warming planet grows, we are going to need strains of wheat and barley that are better able to cope with heatwaves and drought. Such cereals are at the basis of our food system, as they provide essential calories for people and animals.

The problem is that the effects of climate change are already reducing these plants' ability to produce food.

"We have yield loss due to, for example, extreme heat in India or drought which we have seen in Europe. And those events will, based on what we know now for climate change, occur more often in the future," says biologist Wilma van Esse, an Assistant Professor in Plant Developmental Biology at Wageningen University.

There is no time to lose, because the process of identifying new crop strains able to produce acceptable yields under high levels of stress can take decades.

Doing so involves exposing different variants of barley from all around the world to different levels of heatwave and drought in a controlled environment.

Plants respond differently, depending on their age.

"So if drought, for example, happens early in development, a plant may develop less side shoots. But if you have it later in development - drought or heat - we might have less seeds in the end,"  says van Esse.

Keeping the yield high also requires healthy roots, and many variants of barley can't grow well and offer the high productivity we need if they are growing in dry soil.

Viola Willemsen, an Associate Professor of Plant Development Biology from Wageningen University, is aiming to identify the genetic traits in the most resistant root systems.

"These variants are collected throughout the world, at different altitudes, different climates, and different temperatures. And what we do is we look at these root systems under different conditions - so with water and without water  - and see which one is behaving best."

So are we ever going to find cereals as productive as the ones we have now, while also being able to cope with climate change?