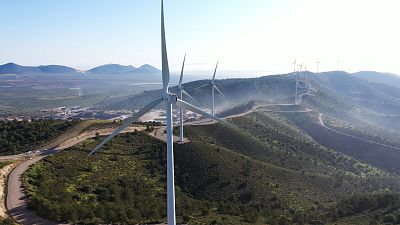 Last year winds were at historic lows in some parts of Europe and unusually high in other areas of the continent.

In this episode of Climate Now, Euronews has the chance to visit a wind turbine construction site in Spain to see how the renewable energy industry is learning to manage the growing variability of the wind.

This wind variability is all over the time scale - minutes, seconds, days, years, seasons.

We also discover how the latest turbines and control centre technology enable the growing wind sector to make the most of even a gentle breeze.

Before that, let's take a look at the latest data from the Copernicus Climate Change Service.

Globally temperatures were 0.3 degrees Celsius above the 1991-2020 average, making it the sixth warmest April on record.

Temperatures across Europe were generally close to average. The standout anomalies of last month were the above average temperatures from northeastern Africa, across the Middle East to Pakistan and India.

North-west India and Pakistan had their warmest April on record, with daily highs up to 49 degrees. And there were heatwave conditions in Egypt and Sudan, too.

In terms of precipitation, in Europe the dry winter in Spain was followed by above average rainfall in the east of the country. On the other hand, the UK and Italy saw less rainfall than average last month.

How does the wind energy industry manage the issue of variability at different times and in different places?

We were curious to know more after the Copernicus Climate Change Service published this data for 2021. It shows how last year some areas of northwest Europe, highlighted in darker blue in the graphic above, experienced some of their lowest annual average wind speeds since 1979, while in the eastern Mediterranean winds were well above average in 2021.

The first answer to that question is the same as choosing a home - you need to think about 'location, location, location'. Wind energy experts spend years monitoring the wind on different sites before building on the best areas. The spot we visited for our report is in Andalucia in Spain, halfway between Malaga and Seville, at the end of a long valley with a perfectly clear view tens of kilometres across the countryside. This is perfect wind farm country.

Once in operation, the turbines manage the small variations in the wind across the day by constantly adjusting every minute to the wind conditions.

"The nacelle of the wind turbines is constantly oriented towards the prevailing winds and the blades are positioned with a pitch that maximizes the energy production," explains Ivan Yuste, the head of the Energy Resource Division, at energy operator Iberdrola.

Over the coming decades, scientists expect wind speeds to become more variable in Europe as a result of climate change. It's something this growing industry is acutely aware of: "It's true that we have observed that wind variability has increased in recent years and it may be because of phenomena like climate change, and what we can do as developers is to keep the wind farms and wind turbines in the best working order and in the best operational mode to be available when the wind is at the sites," Yuste says.

A total of 284 wind farms are managed worldwide from Iberdrola's control centre in Toledo. The teams are always juggling between preventive maintenance on turbines, wind resources and meeting demand. They use weather and climate data to ensure that the turbines with the best wind resources are producing electricity, and then those without the best wind conditions are programmed for maintenance.

Gustavo Moreno, Iberdrola's Renewable Operation Centre Manger says nowadays photovoltaic energy is starting to become an alternative energy for the days when there is no wind, creating a new kind of renewable energy mix to meet customer demand.

"Generally in summer there are sunny days and those are days where photovoltaic energy begins to cover a very large part. So it's very important that each type of energy can cover the rest when they aren't available," Gustavo says.

Another fine tool to tackle variability is efficiency. The new turbines we filmed for Climate Now are the most powerful in Spain. They have a diameter of 145 metres and each turbine is rated at 5 megawatts, which is large for a wind turbine made for use on land. Manufactured in Spain by Siemens Games, the central pillar is made from steel and the blades are made from glass fibre. The idea is to make them over 90% recyclable.

These turbines make better use of the wind.

They can operate in lower winds, and just three of these turbines can produce enough electricity for 12,000 homes, equivalent to the same power generated by 14 older wind turbines. The main reason for the efficiency gains is improved gearboxes in the nacelle and better design of the blades.

"These turbines make better use of the wind. They are higher up so the swept area is larger. We're talking about 16,000 square meters of swept area and obviously, that makes the turbines more powerful and with fewer turbines, we get the same or more power as before," explains Alejandro Arranz, a project manager at Iberdrola.

The technical challenges of variability in the wind in different places and parts of Europe will be managed even better with more integration of energy grids and markets across the continent. However, climate change is a relatively unknown factor - there is increasing certainty that there will be more and more variability in our weather and climate across Europe as the planet warms, particularly in the second half of this century. However the exact impact on wind speeds in different locations and at different times is far from being well modeled nor understood.

In terms of wind energy production, Spain has 28 gigawatts of installed capacity and needs to reach 50GW by the year 2030 to meet its climate goals. Solar capacity in Spain needs to go from 15GW today to 39GW by 2030 to meet the same goals.

If Europe is going to meet its climate objectives, the bloc needs to install 291 gigawatts of new wind capacity by 2030.

For more about the science, technology and politics of wind energy expansion in Europe join our in-depth debate with leaders from climate research, the wind industry and European politics in the video player below.