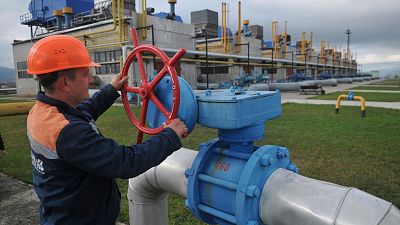 The invasion of Ukraine by Russia, Europe's top gas supplier, has sharpened concerns of disruption to energy supplies. It has also increased scrutiny of European Union countries' reliance on imported fossil fuels.

EU ministers took "stock of possible additional actions in terms of safeguarding supply, the use of strategic oil stocks, the management of gas stocks" at the emergency meeting, according to a preparatory note by France, which currently chairs EU ministers' meetings.

"We have to prepare for all possibilities," France's ecological transition minister, Barbara Pompili, said as she arrived at the session.

The EU had sufficient gas and oil stocks to withstand short-term disruption, she said, "however, there is an issue on long-term supplies."

The ministers will also discuss possible assistance to Ukraine's energy sector and accelerating a planned link of Ukraine's electricity grid with Europe's, which would make it more independent from Russia.

"I expect that energy ministers will support the emergency synchronization of Ukraine's power grid with the European grid as soon as possible," EU energy commissioner Kadri Simson said.

Russia supplies around 40 per cent of Europe's gas and EU rules require all member countries to have a plan to respond to gas supply shocks.

The European Commission has said Europe could cope with a short-term disruption to Russian gas flows. But analysts say a complete or prolonged halt would have severe economic repercussions, requiring emergency measures such as factory closures.

Dutch gas prices spiked by around 40 per cent on Thursday, then softened on Friday as pipeline flows from Russia stayed steady. Gazprom said it was supplying gas via Ukraine in line with demand from European consumers.

We must not underestimate the consequences of the Russian invasion on energy prices and energy security.

Soaring gas prices in recent months have hiked bills for households and industries, prompting governments in most of the EU's 27 countries to offer subsidies and tax breaks.

"We must not underestimate the consequences of the Russian invasion on energy prices and energy security," Greece's energy minister Kostas Skrekas said.

The European Commission is drafting plans to require countries to fill gas storage to minimum levels ahead of winter and expand renewable energy faster. Brussels also stresses the need to shift away from imported fossil fuels - not only to fight climate change but as a matter of security.

The plan, a draft of which had been reported by Reuters, was due on Wednesday but has been postponed to next week "in light of the fast-evolving situation on the ground", an EU official said on Monday.

To meet its 2030 climate target, the EU expects to reduce gas consumption by more than 25 per cent from 2015 levels. Despite this, gas is expected to retain a significant share of Europe's energy mix for at least the next decade.