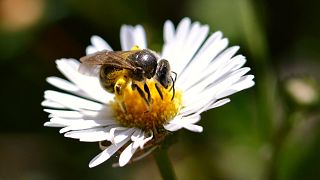 Tetragonula carbonaria - more commonly referred to as the sugarbag bee - is one of Australia's most prolific pollinators.   -   Copyright  Getty Images
By Ben Anthony Horton  with AP  •  Updated: 31/01/2022

It might sound like an unusual choice of pet, but for many young Australians, a stingless species of bee is quickly becoming their favourite animal companion.

Tetragonula carbonaria - more commonly referred to as the sugarbag bee - is one of the country's most prolific pollinators and a producer of uniquely tasty honey.

But unlike many of its fuzzy friends, it doesn’t have a stinger in sight.

"I was surprised that a lot of people didn't actually know they exist,” says Saverio Russo, the founder of the Billion Bees Foundation.

When they see how gentle and tiny they are, they all want them because they’re the best pets.

“As soon as they hear the word stingless, they gravitate towards this and they want to find out a little bit more. When they see how gentle and tiny they are, they all want them because they’re the best pets."

A sting in the tail for Australia’s bees

Throughout 2020, billions of Australian insects were destroyed as a result of devastating bushfires, flooding and urban development.

The Billion Bees Foundation now aims to revive dwindling insect numbers and “give back nature the upper hand.”

"Native bees have been a part of this ecosystem for hundreds of thousands of years, and they face a number of threats, notably habitat loss," says environmentalist Lachlan Prentice, from the Georges River Council in Sydney.

The project hopes that introducing children to the insects at a young age will encourage them to reimagine their relationship with the much-maligned species.

"Kids have a natural inquisitiveness to learn about insects and when you've got them at your doorstep, you can actually observe them,” says Russo.

“I've seen with my kids how they're now starting to observe not just the stingless bees, but other types of insects too."

It didn’t take long for Russo's love of bees to spread to his neighbours. More than 20 homes in his street in south Sydney have a hive of their own, while over 100 colonies have been rehomed to backyards, parks and childcare centres around the area.

"I was very fortunate at first because as soon as I started asking on the street here, pretty much every single person wanted one," smiles Russo.

Watch the video above to see Australia’s stingless bees for yourself.