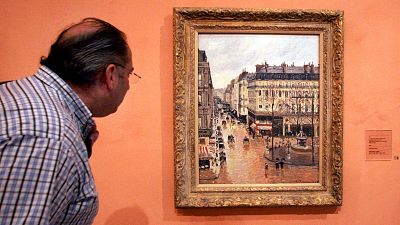 A Spanish museum is confident that it won’t have to return artworks stolen from Jews by the Nazis. The Thyssen-Bornemisza National Museum is waiting on a judgement from a US court to decide whether it can keep a painting by French impressionist Camille Pissaro.

Whether the US court decides to return the paintings or not, the judgement raises the issue again of what should happen to artworks that were stolen from Jewish families by Nazis in the Second World War.

The Spanish museum and the US court

The Pissaro painting, “Rue Saint-Honoré in the Afternoon, Effect of Rain” has been on display in the Madrid museum since its opening in 1992 and has an estimated worth of over €28 million.

However, San Diego resident David Cassirer believes it should return to his family’s ownership. Cassirer’s great-grandmother, Lilly Cassirer was a German Jew who owned the painting. After the Nazis came to power, Cassirer fled Germany in 1939. The Nazis forced the family to surrender the Pissaro painting in order to get a visa.

Although in 1958, the German government reached a monetary settlement with Lilly Cassirer for €232,000 over the painting, she retained the right to pursue the painting if it was ever found.

Since then, the painting has changed hands multiple times, before Baron Hans Heinrich Thyssen-Bornemisza of Switzerland purchased it in 1976. He owned it until he sold his art collection to Spain in 1992 and the Thyssen-Bornemisza Museum was opened.

The case was then taken to the US Supreme Court, but with last week’s decision to return the case to a smaller court, it looks likely that the Spanish museum will retain the painting.

Should Nazi stolen paintings be returned?

Throughout the Nazi party’s reign, countless artworks were stolen or seized from Jewish families. Decades on from the war, different countries have taken different approaches to writing the wrongs of the 20th century.

Many of the artworks stolen have been bought or collected by museums across the globe. In the US, courts have generally allowed the museums to retain their ownership of stolen artworks.

In the case of the Zuckerman v. Metropolitan Museum of Art, a New York court determined that the Leffman family were not entitled to Pablo Picasso painting “The Actor” after they had to sell the painting to escape persecution in Italy in 1938.

The reasoning the court gave was that the family had not relinquished the painting “under duress”. A particularly surprising verdict, given it was sold by Jews in order to escape the Nazis in 1938.

But decisions made by European museums and courts have been much more in favour of Jewish families.

Another Pissarro painting, “La Cueillette des Pois” or “Picking Peas” was returned to a French family. A Paris court ruled that the subsequent sales of the painting, stolen by the French Vichy government, were void and the artwork returned to the original French family without compensation to more recent owners.

Another French ruling this year saw fifteen works that included paintings by Gustav Klimt and Marc Chagall return to heirs of Jewish families.

"This is a first step" because "spoiled works of art and books are still kept in public collections. Objects which ... should never have been there", said culture minister Roselyne Bachelot.

The ruling was part of a historic law in France to ease the transfer of stolen works from public collections to Jewish families.

Also this year, Musees Royaux des Beaux-Arts in Belgium returned a painting by Lovis Corinth to the heirs of Gustav and Emma Mayer, who fled Frankfurt in 1938 to Brussels.

Alongside the US, another country that is still reluctant to return artworks is Germany, claimed head of the World Jewish Congress, Ronald Lauder.

He claimed Germany was dragging its heels on returning art confiscated by the Nazis, especially when comparing laws brought in by other European countries and even the US.

“One country that has done too little is Germany. Germany has a historic responsibility to do the right thing. We all know that the Holocaust had its origins there and was spread from there,” he said.

Returning artworks stolen by the Nazis will long be a complex issue that is ruled on differently depending on the country of origin and where the artworks ended up. Despite the war ending nearly 80 years ago, looted artworks will continue to surface and remain a contentious issue. It was even a theme of Tom Stoppard’s last play “Leopoldstadt” which followed the history of a Jewish family in Vienna who owned a painting by Klimt.