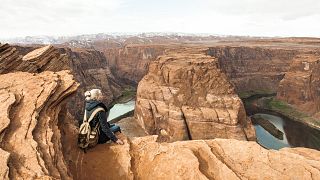 This year has seen many of us reevaluate how we spend our free time post-COVID and travel is often a key part of these plans.

Our daily routines are full of caring for and thinking about others, whether at work or home. So when we travel, many of us enjoy the freedom of not thinking about what someone else wants to see or do. Solo female travel, in particular, is on the up post-COVID, with once in a lifetime trips becoming a top priority

For women going through a divorce, travelling alone takes on a whole new meaning, because ending a marriage can mean release from looking after someone else.

Get inspired about where to go and what to do as a solo female traveller, whether you’re divorced, married or somewhere in between.

Got no one to travel with? Don’t let that stop you

Carolyn Addison, head of product at travel company Black Tomato says the company has seen a surge in solo trips being taken by women since the start of this year.

“The proportion of women choosing these solo trips has increased from 30 per cent to 50 per cent of all bookings,” she explains.

One client, originally going to Spain with her partner in August last year, instead decided to take the trip alone after he broke up with her. Since then she has travelled to Colombia solo and is now looking to spend Christmas in Jordan.

Another female client took an epic trip to Mongolia following her divorce, helping nomadic herders to move their winter camp and horseback riding across the mountains.

“Our core business is families and couples travelling, but notably, we’ve seen many women starting to travel independently - some of them for the very first time, as they take the opportunity to fulfil their personal travel dreams, without waiting for someone else to go with.”

Flash Pack, a British travel company that focuses on adventure holidays for solo travellers in their 30s and 40s, has also seen numerous people book its trips post-divorce.

The company says travelling on your own can be a positive way to meet new people, take on new challenges and empower yourself. Especially after life has thrown you a few bumps in the road, or for those wanting to rebuild their confidence.

Becky Turpin is just one of many women who has chosen to travel solo with Flash Pack post-divorce.

“When I was married we saved money to travel but really only ever took one trip a year,” she says.

“We had some great trips but the Venn diagram of where we both wanted to go, what we were both interested in doing and how much we were willing to spend on it was actually pretty small.”

Becky loved watching travel shows and reading about all parts of the world. She started to save for travel on her own. Then in 2018, she divorced her partner of 15 years.

“As we were separating I started booking my first trip. It was something I could do just for myself and didn't have to consider anyone else,” she explains.

Solo travel forces me to be braver and bolder than I was when travelling with my husband.

“In retrospect, I think it was a way to feel like I had some control over my life during a very chaotic time.”

Becky says that solo travel is something much more spontaneous for her. She doesn’t have to take any other opinions into account and it's easy to change plans at the last minute.

“Solo travel forces me to be braver and bolder than I was when travelling with my husband. I meet so many more people than I used to and make deeper connections with those people.”

It can be more work as she has to make all of the decisions herself - no matter how tired she is. And sometimes Becky wishes she has someone else to share experiences with, “but this is few and far between.”

Challenging herself and discovering new things about herself has been the best part of solo travel after her divorce, she says.

“I am so much more in touch with what I like, what I value in my experiences, where my boundaries are and learning to trust myself. I have seen this carry over into my everyday life as well.”