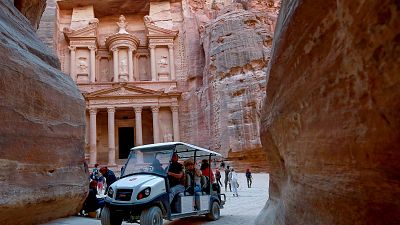 In Jordan's ancient city of Petra, horses and mules are now being replaced by electric carts in an effort to improve animal welfare and help the conservation of the UNESCO World Heritage Site.

Horses and mules have long drawn tourist carriages through Jordan's ancient city of Petra. But in 2018, animal rights group PETA launched a campaign to end the mistreatment of the 1,300 working animals there. The group says the horses and mules often endured beatings and a lack of food, water and shade.

"There is no pollution, no smoke" and this choice has "reduced the number of cases of animal abuse," said the head of the Regional Tourism Development Authority in Petra Suleiman Farajat.

And PETA has described the project as a "major first step to protect working animals".

Modern technology in an ancient city

This project has also been welcomed because it improves the accessibility of the site for people with reduced mobility.

"People with disabilities but also those who have difficulty walking for a long time can now see this wonderful place," says Rudy, a 43-year-old Austrian tourist in a wheelchair.

Hundreds of animals, however, are still working on the site. According to tourism authorities, the number of e-buggies could double in the future - but it depends on demand which is still low due to travel restrictions.

Horses and electric vehicles both carry tourists through the rose-coloured 'Siq' or gorge leading to the famed capital of the Nabateans, which dates back to the first century BC.

Carved out of rock, this ancient city is one of the wonders of the world attracting more than one million visitors in 2019. It is located in a remote valley, among sandstone mountains and cliffs. The Nabataeans, an Arab tribe, chiselled dwellings, temples, and tombs into the sandstone.

The golf cart-like vehicles should also facilitate the conservation of the site, a UNESCO World Heritage Site and the country's main tourist attraction.

Don’t wait for ski season to explore the Swiss Alps. Go in autumn

Will personal wheelchairs soon be allowed as seats on planes?