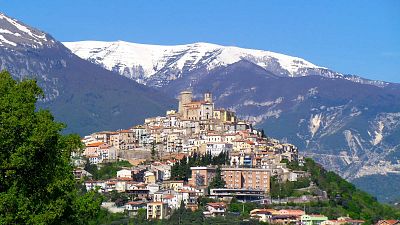 In the medieval village of Casoli, Italy, a 220-year-old palace is getting a complete makeover - and becoming a shared holiday home for 126 lucky owners.

Casoli is a classic medieval town, sitting on a hilltop in the heart of the Abruzzo region of Italy. Named one of the best places in the world to retire, it's known as "the green lung of Italy" due to the wealth of national reserves and parks on offer.

Tucked below a 9th century castle, lies the old palace. Built in 1799, it was once owned by the noble Ricci family. Long since abandoned by them, Palazzo Ricci has been neglected for decades, despite serving as an office and school. When the founder of Viaggio Resorts Mike Brosnan happened to visit the village four years ago, he immediately spotted its potential.

"It was literally the gem at one time, of the historic district of Casoli," says Brosnan.

Struck by the beauty of the whole Abruzzo region, which he calls 'therapeutic', Brosnan got started immediately, breathing new life into this historic palace.

It will soon house 14 fully-renovated luxury residences, owned by 9 families each. The company promises five-star amenities and highly personalised services.

The palace is also joining the luxury holiday home exchange club, Elite Alliance. So the owners can temporarily swap their palace lifestyle for one of 120 high-end resorts around the world.

Why so many owners?

While it could easily be mistaken for a timeshare, the project manager of Palazzo Ricci, Valeria Milano, explains that with a timeshare you buy the right to use a property, but with fractional ownership, you are buying real estate.

"In the future owners can resell, they can rent out, or just, give them to their kids".

Also, as opposed to a timeshare, with fractional ownership people can choose when they want to come each year.

The minimum time available is at least 5.5 weeks for this property, but up to half a year is possible depending on demand from the other owners.

Milano also believes that when people own their vacation home, they feel more responsibility towards the local community.

"Palazzo Ricci is a building that is really important for all the community. So now they're all happy because it's being reborn, " says Milano.

The luxury holiday home is due to open in 2023.

Italy’s best digital nomad communities, according to a local