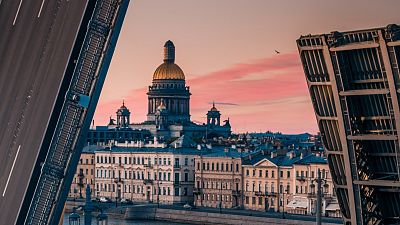 Often considered Russia’s "cultural capital," St Petersburg is undoubtedly a dazzling city. It would be worth visiting for the palaces alone – or in fact, the grand museums, buzzing art scene or spectacular canals.

But many travellers are also choosing "Piter", as it’s nicknamed, as a jumping-off point for exploring the rest of Russia. It’s one of the key cities included in the north-western Silver Necklace route, and as few tourists want to miss it, is also often tacked on to classic Golden Ring tours. Both routes are diverse enough to include destinations suitable for every season, so whether it’s wintry cityscapes or sun-soaked scenery you have in mind, you’ll find them on these circuits.

To really get a feel for the essence of St Petersburg, begin with a visit to the magnificent Palace Square. Here you’ll be able to tour the historic Winter Palace, with its striking green, gold and white exterior and fantastically ornate halls. The enormous State Hermitage museum is also based here, housing one of the greatest art collections in the world, so set aside some time to admire the Picassos and Rembrandts, Michelangelo’s Crouching Boy sculpture, the Rothschild Fabergé egg-shaped clock and much more. Another absolutely-must-see in St Petersburg is the Church of the Savior on the Spilled Blood, an incredibly lavish, five-domed church in the classic Russian Orthodox style. Tsar Alexander II was assassinated here in 1881, hence the evocative name.

For evening entertainment, an opera or ballet at the Mariinsky Theatre, where almost all of Russia’s greatest dancers and musicians have performed over the years, makes for a memorable outing. But nightlife-wise, St Petersburg really comes into its own during the summer "White Nights", when the city has round-the-clock daylight, and there are outdoor festivals, concerts and parties held through the small hours.

It’s very easy to combine a visit to St Petersburg with a trip to Moscow, as the high-speed Sapsan train takes less than four hours, whizzing straight from city centre to city centre. The "Two Cities - a Million Impressions" programme encourages people visiting Russia to treat St Petersburg and Moscow as points on one large route thanks to the handy transport links connecting them and the wealth of experiences to be discovered in both.

Once in the capital, there’s no end of iconic sights to choose from. The Kremlin, Red Square, and St Basil’s Cathedral are unforgettable – if you’re in Russia between April and October, try to visit the Kremlin at midday to catch the ceremonial change of guards in the centre of the fortress.

After all the sightseeing, a visit to the famous Sanduny banya is the perfect way to unwind and warm-up, especially during the colder months. This historic public bathhouse, which dates back to 1808, is Moscow’s top spot to try a session in a hot steam room followed by a traditional venik massage, where leafy branches are used to stimulate circulation.

Time to experience a completely different side of Russia, on a tour of the beautiful medieval towns northeast of Moscow. While the Golden Ring route isn’t set in stone, it’s traditionally considered to include Sergiyev Posad, Pereslavl-Zalessky, Rostov Veliky, Yaroslavl, Kostroma, Ivanovo, Suzdal, and Vladimir.

Following the loop, or just cherry-picking a couple of the stops on it, is also an opportunity to experience Russian rural life up close, from winding rivers and flower-filled fields to wonderfully preserved churches and folk art. June to August are the best months for gentle temperatures ideal for wandering about outside.

Suzdal is one of the favourite Golden Ring stops. This picturesque town is filled with pretty churches and monasteries, and you’ll often hear their bells ringing as you explore the streets. The UNESCO-listed Suzdal Kremlin, with the Nativity of the Virgin Cathedral, and Saviour Monastery of St Euthymius are the main sights.

Yaroslavl is another top choice – the Golden Ring’s oldest city dates back to 1010 and is filled with grand old merchant houses and the bright onion domes of Russian Orthodox churches, while the Volga and Kotorosol rivers running through the city complete a beautiful setting. Don’t miss the city’s Art Museum, which showcases a wealth of 18-20th century Russian art.

The Silver Necklace Route introduces visitors to the northwest of the country, and covers a much greater area, taking in 11 different regions and major cities, of which St Petersburg is one. Karelia is a route highlight – its wooden churches on the island of Kizhi are a unique sight, while endless lakes and forests are ripe for outdoors adventures.

Anyone interested in traditional arts and crafts will find plenty of interest in Vologda, which is famous for its intricate, hand-made lace (there’s also a museum here, dedicated to the craft) as well as wood-carving and enamel production. The city is a great winter destination, as it’s mild and snowy and the streets are decorated with lights, giving the whole place a cosy winter wonderland atmosphere.

Here's why St Petersburg is a top destination for football fans